Out of the Den: Sports Return at ONU 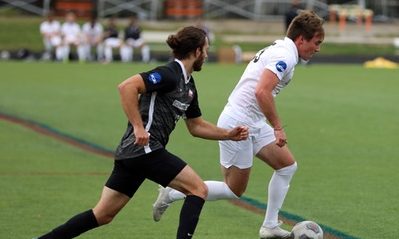 Not even COVID-19 can break the spirit of athletes at Ohio Northern. With the return of athletics have come numerous changes to the way practices, recruiting, and competition look for each sport.

Returning to play has had several phases. Currently, teams are in phase 3 which allows them to practice as an entire team. Prior to phase 3, athletes were separated into training groups that practiced at different times. Head Volleyball Coach Katie Kuhn and her staff have been “wearing masks, while athletes are wearing gaiters during individual drills, huddles and water breaks. We have individual water bottles marked for every athlete, hand sanitizer hanging on the net for use, no individual towels and cleaning on all volleyballs at the end of each practice. We are limiting contact through the net and are only starting to be able to scrimmage in practice.  We also try to incorporate more drills where each athlete keeps their own volleyball throughout the entire drill.”

Most sports are following a similar routine in terms of maintaining distance during practice when possible and masking up when in close proximity. However, the return to play has not come without difficulties, especially for our larger teams. Head Coach Troy Chiefari of the esports team has had trouble “fitting 100 players on 18 PCs each week.” Luckily, some players have the ability to play from home, making keeping the distance somewhat easier. Similarly, Head Coach Dean Paul and the football team have been “keeping our practices in small groups on the field and in the weight room” and have been conducting team meetings virtually. Regardless of the effort put into continuing training this semester, the threat of a canceled season still lurks in the background. As of now, all fall sports have been pushed back to the spring. Here are some of the expected seasons:

Football – Will play in five games scheduled for March and April.

Women’s Soccer – Will only be competing against OAC opponents in a nine game, round robin competition. Top two teams will compete in a final OAC tournament game.

Volleyball – Will have nine OAC competitions with two matches played for each (18 matches total). There will also be a final OAC tournament game.

Esports – Have been competing as normal and were recently invited to a Top 32 National Invitational with over 500 schools.

Indoor Track and Field – Expect to compete in smaller meets than usual.

Most coaches, and athletes, are concerned as to whether or not they will even be able to compete in the spring. Not only is this a concern, but with so many changes this season, the mental health of their athletes is also at risk. Coach Kuhn noted “mentally, I do think our young women are struggling not having their parents and families around on a regular basis.” As with many people during the pandemic, social isolation from friends, family, and teammates has been rough. Coach Chiefari added that despite his athletes being used to a virtual format of competition, “I’m sad they’re missing out on the true sense of community and in person camaraderie they could be experiencing.”

To boost team morale, some of the coaches have been striving to keep the competitive spirits alive in their athletes even though they are not able to compete against other teams. Head Cross Country and Track and Field Coach Jason Maus has been keeping morale high by “having intra-squad competitions. We’re trying to come up with some different ‘games’ or workouts. We’ve tried to keep things fresh and different so that it doesn’t become the same old practice every day.” Most recently, the cross country team completed the Polar Bear Grand Prix to get back into competition mode. Similarly, Women’s Soccer conducted a Polar Bear Cup Series to get the players back on the field. Head Coach Mark Batman said he is “very thankful we have had this fall to train and compete as they haven’t been in that environment since last November.”

As the fall semester comes to a close, students will head home and train independently for some time before returning to ONU for the spring semester and competition season. Regardless, the coaches feel their athletes are well prepared for what is to come. Coach Maus added “physically, I believe we can have our athletes ready to compete when the time comes.  Mentally and emotionally will be a much bigger challenge, I think some of that will be harnessing the excitement!” Likewise, Coach Paul says his players “are making slow progress and [he] will know more when [the players] start practicing all together.”

For Coach Chiefari, the esports players are “highly motivated, mentally strong, and train hard each semester.” He has few concerns for them given the caliber of his athletes. “We’re basically a top D1 school in esports,” making our program a competitive asset for Ohio Northern. He hopes to guide the team to maintain a tradition of excellence and this year of challenges has not gotten in his way. If anything, he says through the pandemic he’s learned to be “better at scheduling with limited resources.”

Surprisingly, the other coaches interviewed also said there were things they’ve learned from this year. Coach Paul looks to continue the utilization of virtual meetings for recruiting this spring and for meeting with his staff and players more frequently. Moreover, Coach Maus stated that “I think this situation has allowed all of us to take a step back and really appreciate the resources and opportunities that we have. It has allowed us to realize things could be worse and value what is right in front of us.”

It is no wonder that Ohio Northern has had continual success in athletics. Our coaches, athletes, and administration have let nothing stand in their way as they work to achieve their goals. Coach Batman summarized it perfectly: “The main message is being flexible and patient. Roll through like water as things will consistently change. Deal with adversity positively. Don’t let this situation beat us.”

2 thoughts on “Out of the Den: Sports Return at ONU”