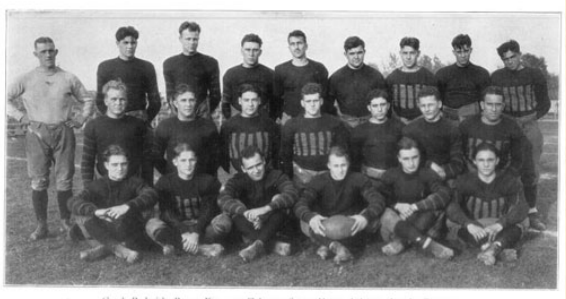 Ohio Northern’s relationship with football has been strong since the beginning. The history of the sport on campus can officially be dated to 1894 when the first games were reportedly played among students. Unofficial games could have been played as early as 1889.

The teams Ohio Normal School (ONU’s name at the time) played were very diverse for their first several seasons. Among the most notable games were the Deaf and Dumb School in Columbus, Heidelberg, and Otterbein, all in the 1901 season. Ohio Normal School notably played the University of Michigan in 1903 and 1904. Ohio Normal School lost the 1903 game 64-0 but triumphantly came back the following year. In 1904, they only lost 23-0. It was a loss, but a feat in and of itself.

Another notable game occurred in 1924, a year after the school adopted the now-famous polar bear mascot. The Polar Bear’s took the field against Denison University, but the players were not in the best of shape. A case of smallpox has broken out in the weeks leading up to the game, and it was so serious that the state board of health was forced to vaccinate the entire team. The team refused to cancel the game, despite the serious discomfort caused by the vaccinations. They fought through the fatigue and held Denison in the first half, but later succumbed to their aches and pains and allowed Denison to beat them 14-0. It was a loss, but a hard fought battle nonetheless.

The Polar Bears had another notable season in 1934, setting the record for the best season in the history of the university. The team was undefeated and completely shut out every team, never being scored on. At the time, they were the only team in the United States that was not scored on, and they were the only undefeated team in the state of Ohio.

The team joined the Mid-Ohio Conference in 1950 and immediately became conference champions that year and won it again in 1952.

The team played for 57 seasons at the Ada War Memorial field off-campus until they received their own field, the Dial-Roberson Stadium, in 2004. The stadium is named after Jim (ONU ‘57) and Nidrah (ONU ‘58) Dial as well as Arden Roberson (ONU ‘49) who was the head football coach at ONU from 1960-1969 and was also the team quarterback from 1946-1948. The team has played here since then and their legacy lives on.

The ONU football team is now doing their best to continue the program and move past the difficulties that come with the COVID-19 pandemic. It seems that the football team has not had such setbacks caused by disease since the Smallpox outbreak of 1924. But if there is one takeaway from the long and respected history of Ohio Northern Football, it is that they can overcome any and all barriers.