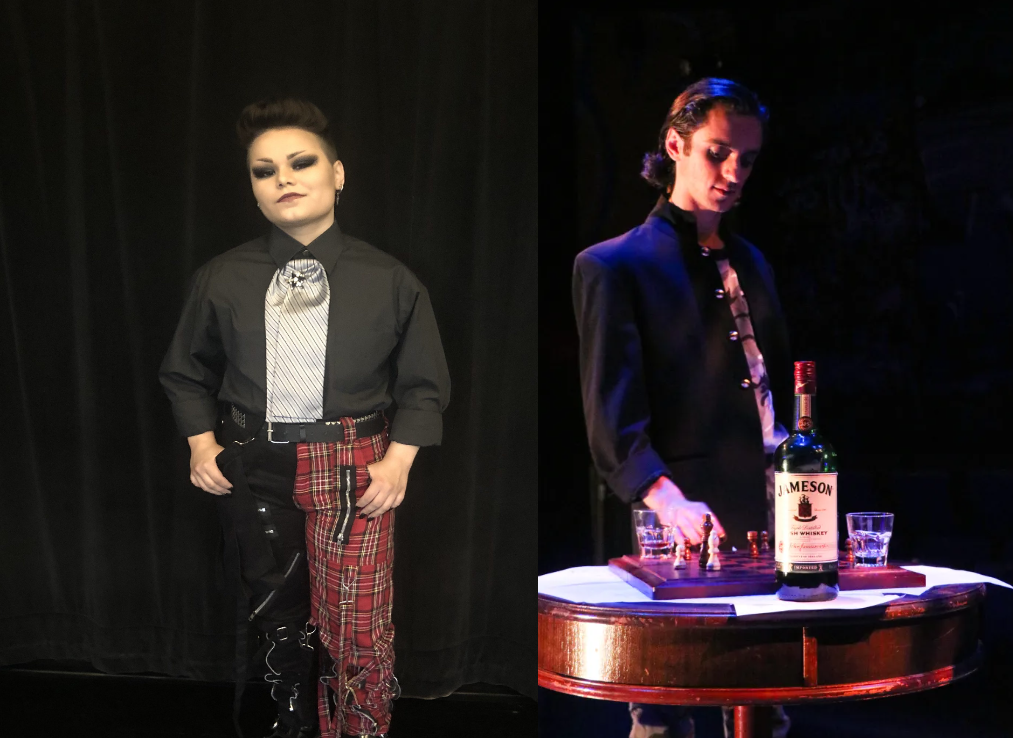 From September 29th to October 1st Ohio Northern University’s theater program preformed William Shakespeare’s tragic play, Julius Caesar. There was an interesting twist, though: the play had a modern and punk theme along with a change of gender in some characters.

Hannah Enicado, a senior who played the role of Antony, expressed her excitement of the theme’s impact on the set design. She especially admired the graffiti style artwork along the theater’s walls, an aspect all students in the ONU theater program had an opportunity in creating. She says, “you’re getting to experiment with a new art form, you’re putting something of yourself into the physical form of the show and you just feel more into the whole production.” Along with the wall art, the majority of the costumes had darker colors and some appeared to be made of leather. Creative hairstyles included one cast member whose hair was pinned up with the support of a soda can. When major twists occurred in the production, characters would record the event with their phones, something commonly done today.

Since this play was originally a work of William Shakespeare, unique dialogue that had to be recited exactly. Senior Caleb Jingo, who played the role of Brutus, stated that the dialogue added pressure to his performance: “with how Shakespeare language is structured, to process them and make sense of them and really getting to a place where it feels natural for me to say these things instead of making it sound like I’m reciting words off a page.”

The conclusion of Julius Caesar was a fierce battle. Staying true to the story, the students reenacted the scenes in an emotional yet safe manner. The weapons used in the final fight scenes were black batons made of plastic and foam. With the professional choreography of Alexis Black, junior Grant Bell and senior Juliana Kelly took the roles of Fight Captains. According to Kelly, the responsibilities of a Fight Captain included, “[being] in charge of the integrity of the choreography making sure that everybody feels safe and listened to and making adjustments as needed. Every day before we would start a rehearsal, we would do a fight call where all the actors have to come in the shoes or whatever props they have. We do it once at 25% speed so that we can remind ourselves of the moves and we can check in with our bodies and see if any adjustments need to be made and then do it at 75% speed which is how fast we do it in the show.”

The skill of the actors made an impact on the audience, but those who work backstage were also responsible for creating what made the production such an awe-inspiring experience. One of the most emotional moments was the death of Julius Caesar. The coordination by the actors with their prop knives would not have made the scene so jarring without the clever design of Julius Caesar’s costume. Senior Garret Fant, who played Caesar, described how a sleek suit transformed itself to appear ripped and bloody: “when I exit from my scene with Calpurnia we actually go backstage, we have Velcro straps that are in the jacket that that we then attach a blood sheet on with premade stab wounds onto it.” Additionally, Fant held all of the students who worked backstage in high regard, praising their work with costumes, set design, sound effects and lighting. He says, “when Brutus stabs me we don’t get that same effect if we were doing it in the same lighting. In order for us to put on our best performance on stage a lot of stuff has to happen behind the scenes and they don’t get enough credit for that. They are just as important to the process as we are.”