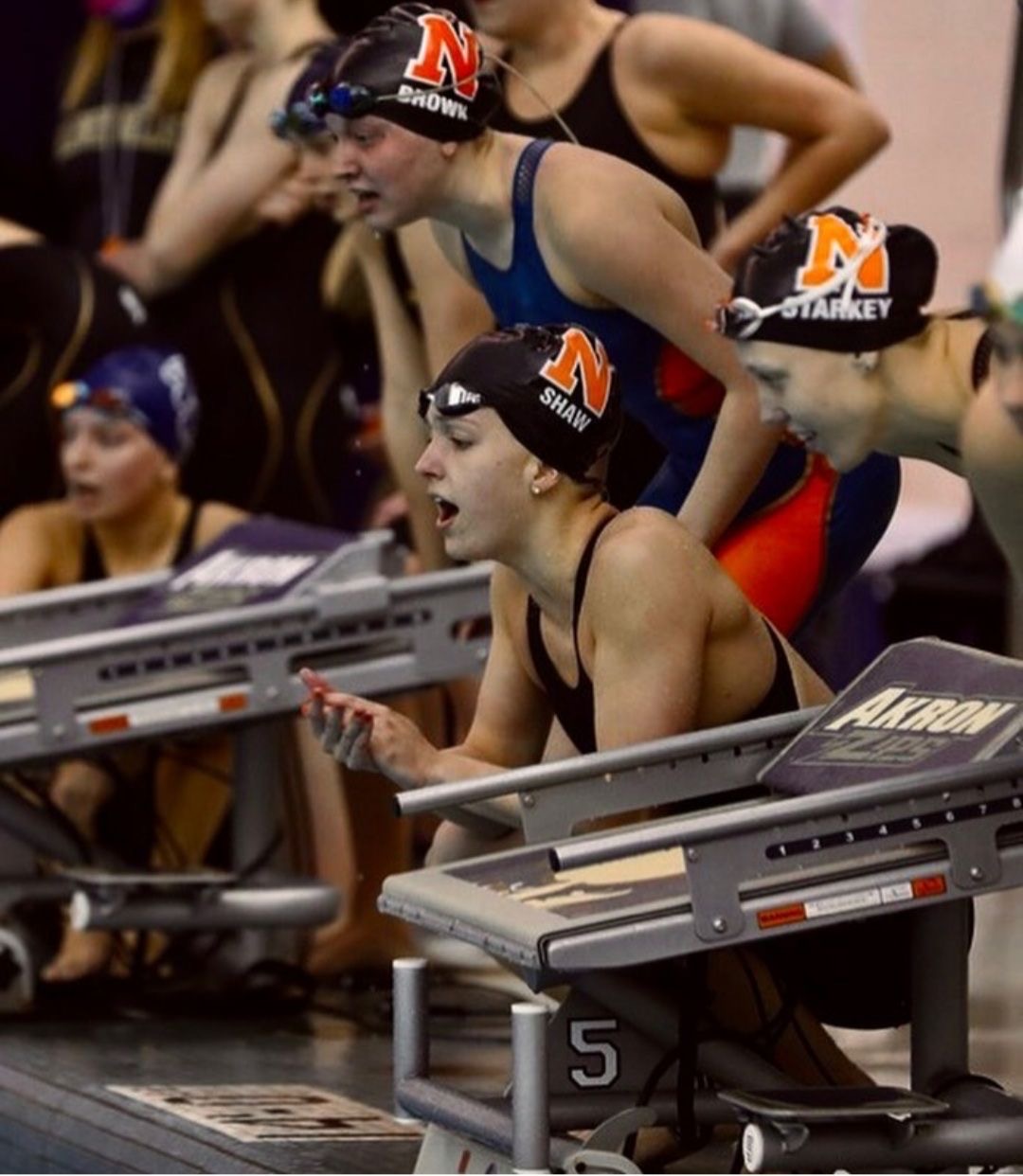 One of the swimmers who was anxious and eager for that title was Shelby Starkey, a third-year pharmacy student.

In season, the women’s team held a 6-4 overall score with a big win over their rival John Carroll University (JCU). The men’s team finished the regular season with a 5-3, topping JCU in a large upset as well. Starkey was a massive asset to the polar bears for the season – individually and on the relays – and helped lead the team to be In-Season OAC Champions. Starkey explained the preparation for the season that resulted in the team’s success.

“Training this season, we jumped into it a lot faster early into the season, but then backed off more than normal for taper for OACs. For our more important dual meets, we still pushed really hard. Our level of intensity was comparable to years before, but we had a lot more interval rests throughout the season.”

The team left the Wednesday Before to prepare for the three-day meet. Starkey explained the atmosphere of the first day, explaining that preliminaries were more “casual and fun, but not an overwhelming amount of team spirit.” She went on to point out the stark difference when it came to finals in the evening.

“Going to finals, it was a whole new team; we had pom-poms and gear and cheers. The freshmen really got into it. Because of the excitement, it really got the team all into it. I feel like the swimming was so fast because of the atmosphere created.”

With her backstroke and mid-distance freestyle, she was prepared for a successful championship, and so was her family. Starkey credits her achievements to her support system consisting of her mother and father. Both parents were able to attend most regular season meets as well as the OAC championships.

But Shelby Starkey was not the only one her parents were cheering for at OACs. Samantha Starkey, Shelby Starkey’s younger sister, swam for Baldwin Wallace in her debut freshman season. Luckily for their parents’ nerves, Samantha Starkey swam opposite events to her sister – consisting of the 500 free, 200 free, and mile. Shelby Starkey expands on this rare occurrence,

“Our big opponent is John Carroll University, so with Baldwin Wallace not being a rival, it made it more fun. I had her Baldwin Wallace teammates coming up to me in the warm-up pool and cheering for me and Ohio Northern. Honestly, the two teams came together. I had so much fun watching my sister find swimming again because she originally just wanted to focus on school. As a big sister, it was incredible to see her actually enjoy swimming again.”

Her parents seemed to have a harder time watching both daughters swim. Starkey explains the thoughtful process both parents had when it came to supporting their children,

“They had a hard time figuring out what they were going to do. Mom wore a Baldwin Wallace shirt to prelims and an ONU shirt at finals. Dad would switch between hats for both teams. They felt like they couldn’t win between the friendly heckling of the coaches on both teams about wearing different spirit wear. Another problem they ran into was deciding which team to sit with; it was pretty funny, and to boot my other sister was swimming in Canton, OH.”

When asked about her opinion on her performance, Starkey stated the following:

“I should say yes, but my times weren’t where I wanted them to be. I added time in some places, but I would’ve liked to go faster yet I placed higher than before. Strategy-wise, I was satisfied but felt like I should’ve dropped with the level of training we did this season.”

But Starkey is not done. With one, possibly two, years of eligibility under her, Starkey makes plans for the summer already.

“This past summer, I focused on working and didn’t take time to myself or to train as much as I liked. This summer is different. I am training for a triathlon. I am doing different types of training to gain strength in my body. I think starting new training methods will help me come in strong and take care of my body and not exhaust it just swimming constantly.”

Ohio Northern’s men and women’s team both finished second this year, with the men’s team fighting up to the last relay for their position against Mount Union. Some of the biggest swims of OACs consisted of the following first-place wins:

Read more about the results of the three-day championship meet below. Result link: https://athletics.mountunion.edu/documents/2022/2/20/full_results.pdf