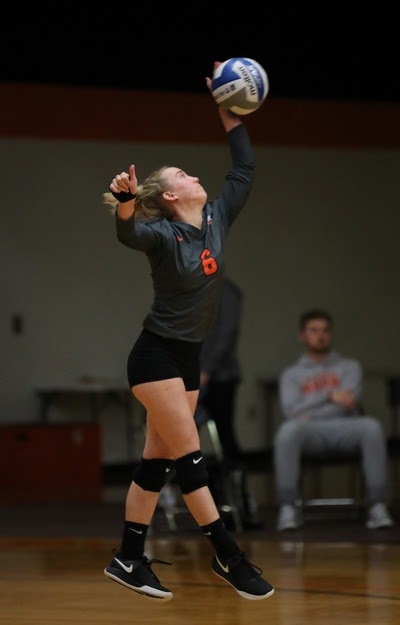 From studying pharmacokinetics in the classroom to diving for balls on the court, third-year pharmacy student Hannah Hall celebrated two major accomplishments in both academics and athletics in the short time of a singular week.

As a Defense Specialist (DS), Hall has been playing volleyball for many years and was excited to continue playing at ONU and becoming a 2025 PharmD candidate. This combination came with difficulties. When asked about the balance of studies and academics, Hall says:

“It is difficult… We practice everyday for about three hours, and that’s coming straight from

class. I am pretty tired coming back from class and practice to go back home and study right

after. It is the best of both worlds. You have to sacrifice a little bit more time than the average

Hall says the culture of the team makes the academic hardship easier. She mentioned that this team has been one of the best she has played on. With one of the largest teams ONU has had in years, twenty-four student-athletes have created a culture that Hall loves. She says:

“This past team has been probably the most fun team I have ever been on. There has always

been an attitude or drama, but this team: everyone gets along with everyone. It is really cool

team, I feel like. Yes, we compete for positions, but everyone is always supporting and cheering

for everyone no matter what. “At least my freshman year, the amount of team really

helped be my support system. I feel like first years are always scary coming on the

team because they do not really know anyone, but the instant family I got because of it

was awesome to have.”

This may answer to the team’s success this season, as they won both the 2021 Regular Season and OAC Championship. Hall spoke about her experience leading up to the OAC volleyball championship game:

“We came in knowing we were going to be pretty successful. We had a great freshman class that came in, so looking at that right off the bat during preseason, I knew, personally, that we were going to do well. Everyone was really motivated after our past season got cut early due to COVID. We used that as our motivation to win this season.”

Leading up to the match, Hall was faced with a challenging week of academics. With back-to-back exams and assignments paired with the semi-finals match that Thursday, she claims it was a “heavy load.” All the work seemed to pay off as the team won all three sets against Otterbein on Saturday, Nov. 6th and finished 21-5 overall. Hall explains the feelings, saying:

“It is amazing… Especially when you’re so close to your team. For me, the last time we won was my freshman year, but this season was so cool because of how much the team has changed and how much closer we are. I think that no matter who is playing, everyone knows that they worked and earned that championship together. It could not have even been done by just the people playing that night. It reminds us of how much work we’ve put into it. I mean, we have been here since August 1st and practicing everyday gets tiring, so seeing all that hard work pay off is really cool.”

Just a week afterwards, Hall celebrated another milestone. The White Coat ceremony, the time when third-year pharmacy students receive their white coat, to acknowledge their process in the pharmacy program. Hall received hers on Nov. 13th in King Horn Sports Complex – the same location where she celebrated her athletic victories shortly before.

With limited time in between, Hall explains the feelings of so many victories in such a short time:

“It was amazing. I was on a high for a little bit. I experienced that major win and then my work in the classroom, even if I put so much time into volleyball. It was nice to see them happen back-to-back.”

The timeline did not come uncomplicated though. Hall explains that the ceremony on Saturday was on the same day as the NCAA tournament, so she had to choose between the two. This year the NCAA was located in Iowa. The ONU Polar Bears had a scheduled time to play on Friday night. Hall explains that she wouldn’t be able to make it back in time. She chose to stay back for the ceremony and not go to volleyball. Hall felt like that was the right decision due the experience of the OAC championship and was supported by her team.

Hall did not celebrate these alone. Joined by her mother and step-father for the famous match, both were also in attendance to watch her academic achievements as well, but this time, her sister also joined.

When asked to elaborate more on her overall experiences of being a high-achieving student-athlete, Hall gave the advice to others in the following statement:

“My biggest advice for incoming freshmen who want to tackle sports and pharmacy school together is to focus on time management and prioritize studying in a way that will give you time in the future to do other things while in school. Do not procrastinate or put things off because it will only make things harder down the road when there are other things you want to do but you can’t. It’s a fun experience but it is also not fit for everyone. I know a lot of people get stressed, and it can negatively impact someone who is not prepared to schedule in the right manner. It is worth it just because the experience you can get from being on the volleyball team specifically is just awesome. It is a unique experience I wouldn’t have gotten anywhere else if I didn’t do volleyball.”