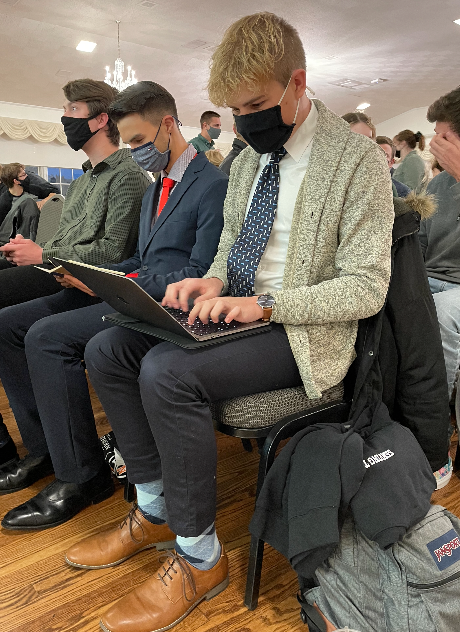 Town Hall, formerly known as Coffeehouse with the President, is a traditional event hosted by Student Senate each semester. The function operates as a Q&A-styled experience that permits students to ask the President direct, burning questions. Typical topics in the past have involved matters such as explanations of tuition raises, which buildings will be renovated next, and university budgets.

In April 2021, students attended the town hall to principally address the possibilities of the rumored Starbucks contract to replace COSI on Northern, located on South Main Street in Ada. Due to the presence of an already established Starbucks-affiliated coffee shop on campus, Northern Lights, and the threat of fewer food options, students had extraordinarily unsupportive opinions about the notion. Throughout the town hall, President DiBiasio revealed the university’s efforts to get other chains like Chick-fil-A instead, but in the end, regardless of the overwhelming backlash from the student population, Starbucks officially opened its doors this September.

This semester was not any tamer and carried with it an even more hostile tone. Originating amidst proposals within the Board of Trustees of the University, President DiBiasio announced his idea of a four-year, or eight-semester, housing requirement for all students to help fill the excess housing on-campus. Within Student Senate, the student representatives deemed it a pressing matter and hoped to discuss it at this semester’s Town Hall. The Student Senate President, Andrew Mantenieks, emailed the student-L to inform the student body of the situation. He wrote,

“President Dan will be at tonight’s Town Hall to speak to the student body about the
possibility of changing the on-campus housing requirement from six semesters to eight
semesters. He has assured us that all current students would be grandfathered into the
current requirement. Please join us to be informed on this matter and to have your
voice heard by the administration.”

Word spread and reached the infamous Barstool Northern, a Barstool-affiliated Instagram page that organized a poll and questionnaire regarding the four-year requirement. The consensus showed extreme and overwhelming opinions against President DiBiasio’s mandate. Post after post, Barstool Northern rallied students online and formulated an unusually sized crowd of students that attended the Town Hall on October 27th from 7:00-8:00 pm in the McIntosh Ballroom.

Presumably, President DiBiasio was informed of the posts, opinions, and outrage in advance to the actual Town Hall since he entered the event with a prepared speech addressing the housing mandate. President DiBiasio even requested that the Vice President of Finance, Jason Broge, be present and referred to him as his “number guy.” President DiBiasio came equipped to defend himself and his proposal.

Before taking questions, he appeared flustered and out of breath. This could have been due to the crowd of upset students facing him, but instead, he credits the disorder to receiving both his flu shot and booster simultaneously a few hours before. President DiBiasio’s opening speech addressed that the four-year housing mandate was in notably early planning stages and only proposed as an attempt to revive the absent campus buildings and their losing revenue. Jason Broge then spoke, claiming that, due to previous building sprees decades ago, the school is still paying off 93-million-dollars in bonds.

With fraternity circle and Stambaugh collecting dust, the University is hoping to reach 95% capacity to ease the debt. With 300-400 apparent open residences on-campus, the university reportedly is hurting for students to fill the dorms and thus investing in the building. President DiBiasio ended his speech by vowing to incentivize students with competitive pricing to the surrounding Ada renting/land-lord business. Proceeding that information, students then raised concerns about how this may affect the Ada community that profits greatly from the student renting businesses. President DiBiasio responded by saying, “The Ada community and the college are a symbiotic relationship,” claiming that it would not influence the community too harshly.

Brandt Marshall, a junior at ONU and native of Ada, challenged otherwise. Nearing the conclusion of the tense town hall, Marshall took to the microphone and delivered the following statement:

“I am here, defending my fellow students, many of whom cannot attend this town hall
as it was conveniently scheduled during three varsity athletic contests that many
students are currently attending because they care about and support their fellow
students.”

Marshall then continued to express his concerns about this new proposal and what it means for the university in the coming years.

“It seems like this university is only interested in micromanaging. For example, the
mask requirement this year, your proposed 4-year housing requirement, and the
closed-door talks of mandating the vaccine. All of which have decreased student
morale and have pushed students who are already considering leaving ONU closer to
pulling the trigger on that decision. So, I’ll ask, what are you going to do next? Take
away the option to commute? That’s a real good way to get more money from your
students as well as take away opportunities from the few adults that have chosen to
come back to college. You could even open another coffee shop to kill more local
businesses if you’d like. You claim to listen to student feedback to make the university
better for us, but did you take the Starbucks petition into consideration when deciding
what to replace Cosi with?”

Marshall’s statement completely silenced the room as he threw rhetoricals repeatedly. President DiBiasio nodded his head in what seemed to be surprise and discomfort, to say the least. Marshall continued, uninterrupted on the microphone, as he explained his perspective on the relationship between Ada and ONU.

“Do you want to know why there is a disconnect between the university and Ada? You
constantly take, take, take from the community. Ada didn’t have McDonald’s until
2009 because ONU had enough employees on the Ada City Council that McDonald’s
couldn’t get enough votes from the council to open a restaurant. How do I know this?
I’ve lived here my entire life. It’s a small town, and word gets around.”

Marshall spoke not only as a student considering the future of this university, but he also spoke on what this new requirement could do to Ada, a place he’s called home his entire life. It seemed a very personal matter that Marshall took seriously. He took continuous jabs at the President in front of the crowd.

“If you actually go forward with this 4-year housing requirement, you’ll kill the Ada
rental housing business and drive the stake further into the disconnect from the town of
Ada and ONU. This leads me to believe that in a month or so you’ll send an email
along the lines of: we listened to student’s feedback and have decided to move forward
with the 4-year housing requirement.”

Others agreed with Marshall’s opinion. After the event, an anonymous local Ada landlord also commented on the perspective of the possible effects on the rental business, saying,

“Yes, it will affect what Ada community today as a whole, meaning the revenue the
Village of Ada brings in from the rental properties – local businesses. Is ONU going to
support Ada’s economy? Landlords are a huge part of Ada. I think enrollment will be
affected. Students want their independence by living off-campus on their own and
learning what basic bills are while living on their own.”