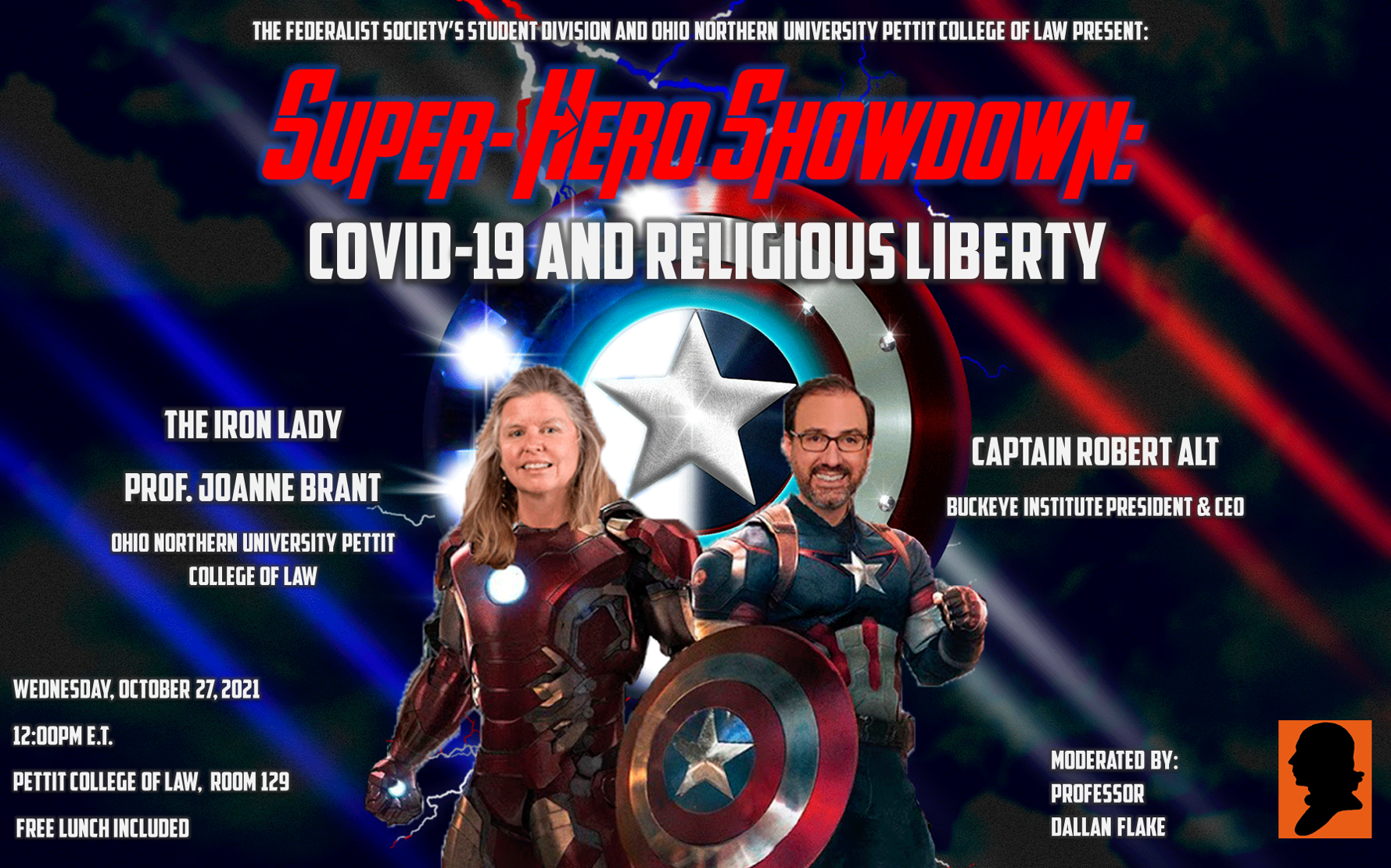 By now, there’s not a whole lot you can do without hearing about the coronavirus. Whether it’s people wishing for life to go back “to normal”, meaning to a time pre-pandemic, or people saying mask mandates or vaccine mandates infringe on their personal rights as Americans, everyone has something to say about Covid-19. Organizations here on campus are no different, with students feeling frustrated with the second year of mask mandates despite a high immunization rate among the college community.

One organization, the Federalist Society, based in the Pettit Law School, looked at how vaccine and mask mandates could potentially infringe on religious liberties granted to citizens within the first amendment. This conversation was posed as a debate, with Constitutional Law Professor Joanne Brandt and Robert Alt from Buckeye Institute.

In determining who would be part of the debate, the Federalist Society decided on Professor Brandt because “she is a renowned and knowledgeable Constitutional Law Professor at the Pettit College of Law. She also specializes in the Free Exercise Clause.”

The Free Exercise Clause is a part of the First Amendment in the Bill of Rights. This clause, “enables a person to hold whatever religious beliefs he or she wants and to exercise that belief by attending religious services, praying in public or in private, proselytizing or wearing religious clothing such as yarmulkes or headscarves. Also included in the free exercise clause is the right not to believe in any religion and the right not to participate in religious activities.”

Robert Alt was selected because of his “vast experience in litigating constitutional cases as President and CEO of the Buckeye Institute, and his highly regarded reputation as former President, and current Secretary, of The Federalist Society’s Columbus Lawyers Chapter. In fact, just last week he filed a lawsuit in the 6th Circuit Court of Appeals regarding President Biden’s vaccine mandate on private employers.”

For more information regarding the lawsuit see here.

President of the Federalist’s Society, Kyle Nazareth said the purpose of the event was to host an open, fair, and serious debate about individual freedoms in the midst of COVID-19.

“We believe debate is the best way to ensure that legal principles that have not been the subject of sufficient attention for the past year receive a fair hearing. We chose the topic of COVID-19 and restrictions on religious liberty because this was the first debate since the beginning of the COVID-19 pandemic. Also, this legal issue has been a hotbed for constitutional litigation, presenting opportunities for the Supreme Court to overturn longstanding precedents, such as Employment Division v. Smith. The free exercise of religion is also vitally important to the Constitution, as churches have traditionally served as the foundation of local communities.”

Nazareth also spoke about how the pandemic has become politicized and has a stigma surrounding it. Whether people believe that vaccines should be mandated or whether the vaccines are infringing on personal rights, stigma exists no matter which side you happen to fall on. This debate was also centered around inviting opposing viewpoints to come together to allow both sides to be presented to the audience.

“I would hope that this debate has reinvigorated the desire for passionate civil discourse in our community. In our current age full of raging culture wars, ’cancellation’, and declining social capital, the ability to have controversial conversations and remain friends at the end of the day, or at the very least not despise each other, is vital to the integrity of society. The Federalist Society encourages anyone of any ideology to attend our meetings and events. What sets our club apart is that we invite people whom we know will seriously disagree with us. We want to hear what others believe in, and share with them what we believe in. We believe open and honest dialogue performed with mutual respect makes us all more well-informed and responsible citizens.”