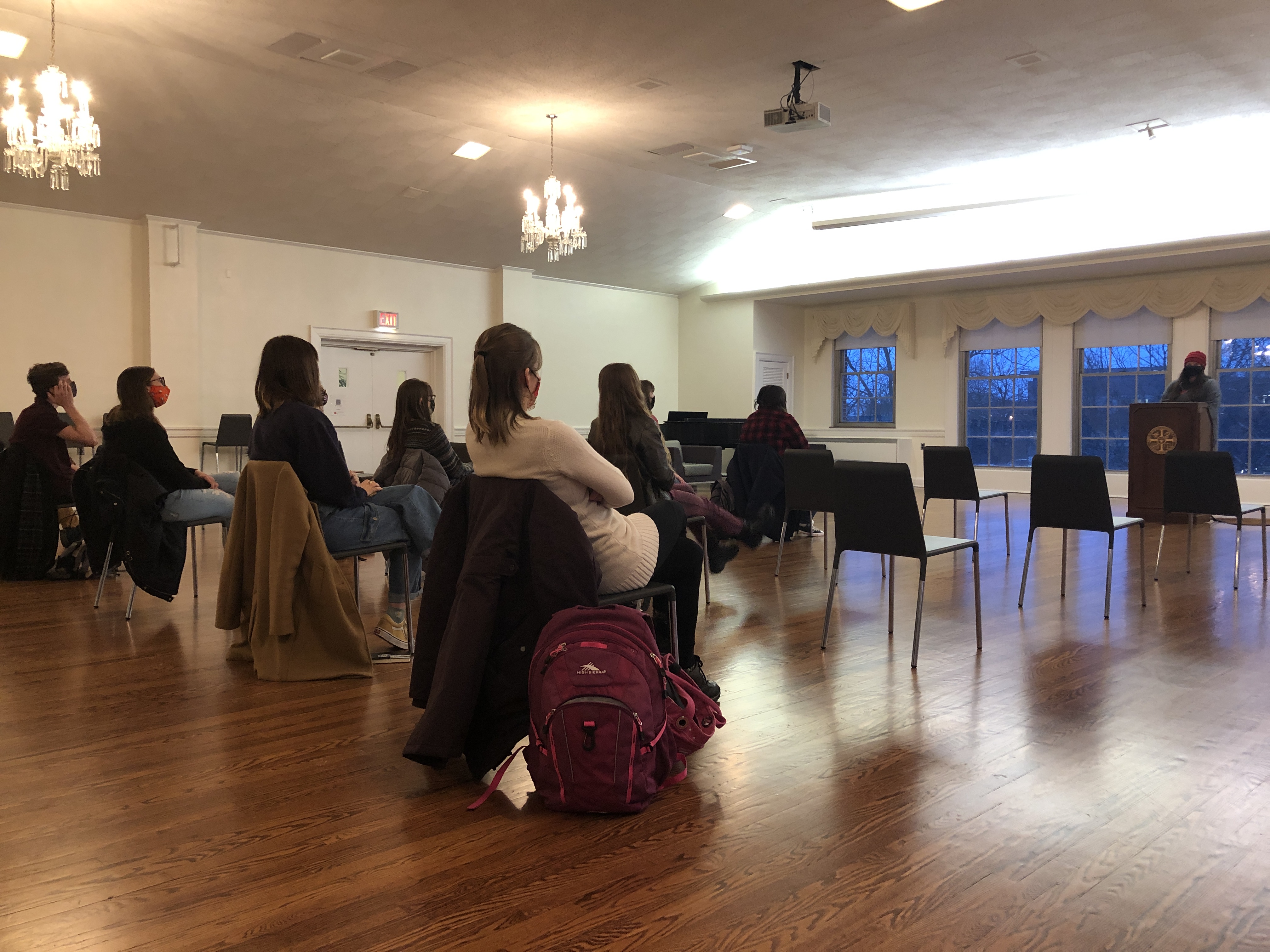 Valentine’s Day is filled with many emotions varying from self-love and romance to heartbreak and anger. Many groups on campus annually make an effort to celebrate the holiday by selling food, cards, and more, and the option to deliver these objects. Another way students can express their emotions about Valentine’s Day is through Polaris Magazine’s annual Valentine’s Day Rapid Fire Reading.

This Rapid Fire Reading event was held on February 10, upstairs in the Ballroom of  MacIntosh Center, where thirty chairs were spaced out to promote social distancing. Music played in the background as students walked in and continued through the readings once the event began at six o’clock. Jaiden Deubler, Co-Editor in Chief of Polaris Magazine, welcomed the students who attended and briefly introduced the event. The first reading was performed by Professor Jennifer Pullen, an adviser to the Polaris Magazine, who was first on a signup sheet that guided the list of students who performed at the reading. Nearly ten individuals signed up to read a piece at the reading, and other students who hadn’t signed up were allowed to read a piece if they liked once all who had signed up had performed. The readings ended around 6:30 PM but the podium was open for other students to arrive and perform a reading if they wanted, and the remainder of the event consisted of lighthearted conversations between attendees.

I was excited to attend this event and to see what sort of pieces people would be reading. I wasn’t entirely sure what to expect and I walked in with the stereotypical movie-like scene rolling through my head of individuals sobbing as they read heartbreak poetry and boxes of tissues lining the aisle. I was pleasantly surprised to see more than sappy love poems read off. There were a few sad pieces mixed in with satirical love stories, pieces of raw feelings, indigenous legends of love, dramatic readings of songs, namely, Taylor Swift’s song “Picture to Burn”, and more.

I enjoyed seeing other people’s perceptions of Valentine’s Day and love, as well as hearing their explanation of the pieces they read. Around half of the pieces read were original pieces written by participating students, some written intentionally for this event and others had been written previously for other reasons. I thought that was awesome because I don’t have a knack for writing love poetry, even poetry in general. It was great to see the creativity and raw emotions that some students were able to convey through their readings.

The conversation following the readings was an awesome experience in addition to the readings. It was uplifting to me to see that all individuals who participated in the reading were starting conversations with each other and had started a large circle of complimenting each other on their pieces. This circle of complimenting led to telling stories of other readings individuals had attended, a discussion of how they went about writing their pieces and some of the difficulties they had encountered during the writing process, and open conversation about how sharing these pieces can be difficult.

I was motivated to attempt to write poetry again following the event, although it would take me some time to find the courage to read anything I had written in front of an audience. Seeing students open up and allow themselves to be vulnerable in a safe space through reading their pieces and through the following conversation was inspiring to me, as well as the support from their peers. I would attend another Rapid Fire Reading session, whether it’s Valentine’s Day-themed or not, and I hope to see even more students opening up through their writing with this opportunity.