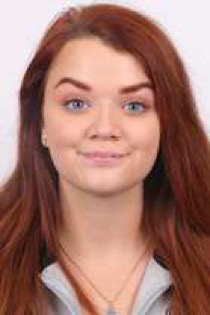 “The key to swimming is shutting off your head” said Arin Wade, a sophomore Pharmacy major at Ohio Northern University. When she reminisces over her best races she says that you never remember your best races. These are the races that the swimmer lets the hours and hours of training take over leaving it all to their bodies, in essence, shutting off their heads.

Wade started swimming about four or five years ago to help with a shoulder injury she had sustained while playing softball. It was a rough beginning for her. She went into her first meet all fired up and ready to compete cheering on her teammates with her heat, lane and event written on her arm. When her event and heat came up, her coach found her at the wrong end of the pool cheering on her other teammates. She hadn’t the slightest idea of how to read the heat sheet, and when it came time, she missed her first race at her first meet.

She fell in love with the sport anyway. The camaraderie, the “universal (team wide) trauma” from all of the early morning training sessions, and the full body workouts all drew her in and convinced her to swim for the rest of her high school career and into her collegiate career.

One of the shining moments of Wade’s highschool career came as quite a shock. Wade is a freestyle sprint swimmer. She likes to go fast in the water and had never trained for distance swimming before her coach told her she would be swimming the 500 at one of her last meets.

Accustomed to a 50 free (one lap down and back), the 500 (10 laps down and back) seemed insurmountable. Wade mounted the block anyway. After she hit the wall at the end of the race and looked up and over to the board of records on the wall, she realized that she had broken a school record for the 500.

Wade left highschool with a record to her name. That did not make the crossover from highschool to college swim any easier. The lengths for highschool and college swim are vastly different. The college lengths are about three times farther than the highschool lengths, making the training sessions roughly three times as strenuous. The season itself does not end either. There is pre-season, season, post season and the swimmers are expected to stay in shape over the summer. This includes lifting, running and swimming.

When the swimmers are here at the school four out of seven days a week they start their morning at 4:50 a.m. to get to their morning practice before classes start. This morning practice is followed by classes, an afternoon practice, any other activities or groups that they are a part of and of course, studying. Wade is involved in Student Senate, Kappa Psi, President’s Club, Pharmacy Executive Council, NCPA Business Plan Team and Women in Business.

She believes in, “setting yourself up for success”. She does this by, “putting everything in google calendar and living Bible by it”.

Life, however, does not care how prepared and organized you are. Sometimes life just hits wrong. Wade tore a ligament in her rotator cuff and was out of swim for two weeks in the middle of her first semester here. After she had recovered from this, she developed mononucleosis. She was out of school and swim for another two and a half weeks. She was exhausted and disappointed in her first college season and semester. She still took it upon herself to go to the gym and run on the treadmill.

She got back to swimming just in time for Training trip. The swim team takes this trip every year. They train non-stop for two weeks. Last year the trip was to Miami Florida.

Wade received a call from her mom right before this trip. Her grandma had broken a hip and they were worried about infection. Her mom urged her to come home, so she did. She came back to school after the doctors had told her and her family that they thought her grandma would get better. Wade received another call the morning of her trip. Her grandmother had passed away. She went on to Training trip. The most important thing was seeing her grandma before she passed. Since she was gone, Wade knew that she needed to be with her team, and that her grandma wouldn’t be there for her even if she missed the trip.

Wade went to this camp with a hurt arm, recovering from mono and dealing with the emotional turmoil of losing a grandparent. She would not be defeated.

The teams that go to this camp hold a mock meet at the end of it for fun. Wade had a lot on her plate when she went into this camp and was not in the best shape she had ever been in. She came out of this camp at the mock meet finding that she had nearly beaten her personal record. “Even though it wasn’t my best swim, it was some level of determination that I had never seen in myself before. So, I’m pretty proud of that” Wade said when recalling the memory.

Swimming was an escape and a therapy for Wade when her life had spun out of control. In a time of so much unknown, how much more can you ask from a sport?