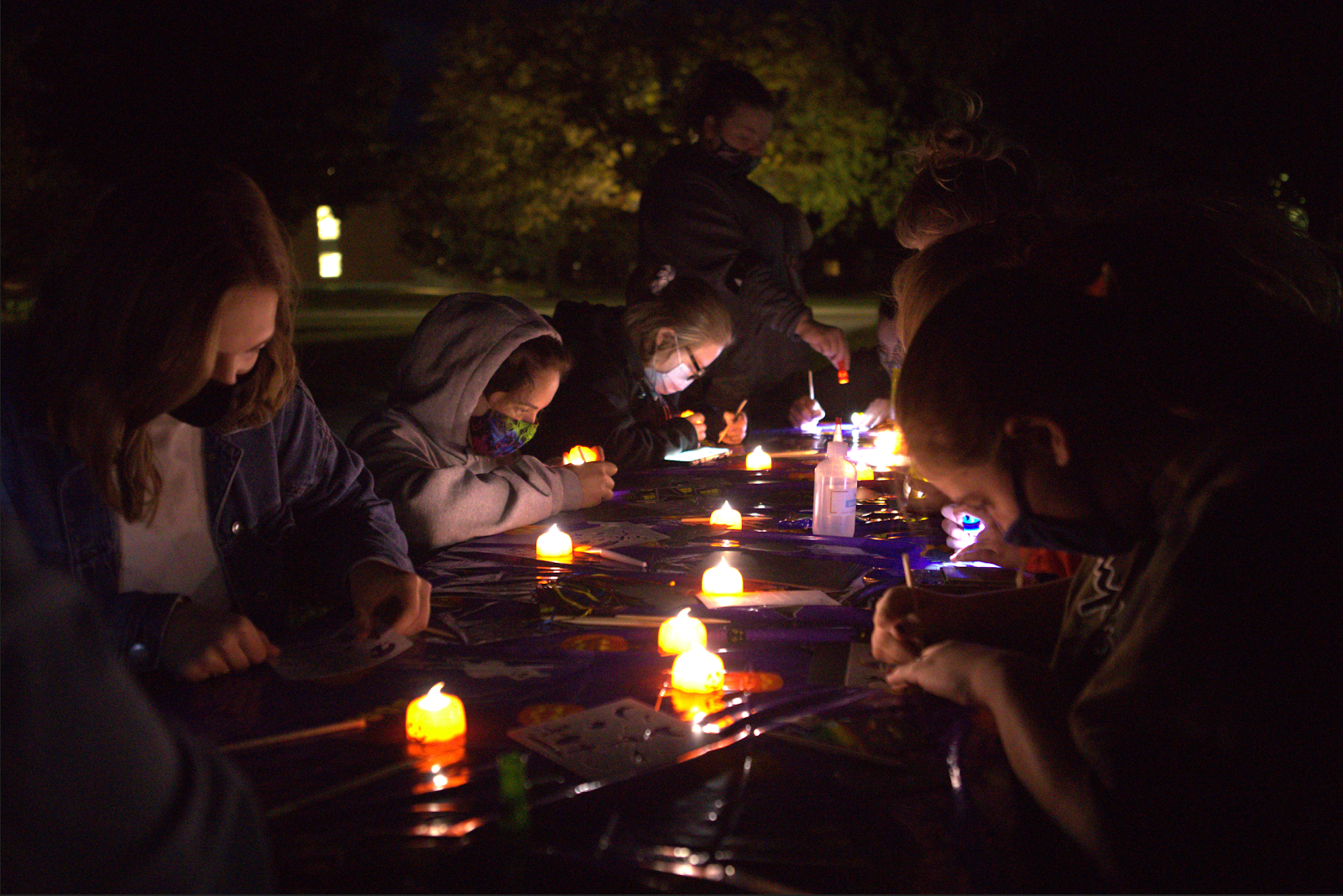 A full moon shone over SPC’s Haunted Campus Tours event that kicked off the Halloween season and allowed students the opportunity to learn more about the mysterious history of the ONU campus. The event was hosted by one of SPC’s Event Coordinators, Abby Leatherwood, who also hosted SPC’s Scooby-Doo Night in August. The tours, held Oct. 2, brought students to several different locations on campus with peculiar and hair-raising stories.

A Boo Ambassador led each tour group, consisting of ten students or less to promote social distancing. The tour guide used a script to relay the facts to the students and to move along to the next location. Students and Boo Ambassadors were provided with mini flashlights to use to light the way to some of the darker locations. SPC members dressed as ghosts appeared throughout the tour to add an additional spooky element to the event

Students began the tour by the Tent on the Tundra and were led to the first destination: Heterick Memorial Library. At this stop, students learned of Frances and Robert Heterick, whose ashes are held within the library. Students were challenged to pay attention to the portrait of Robert Heterick’s great-grandfather the next time they walk past the painting on the second floor, as multiple members of the library staff feel as though they are being watched by the eyes in the portrait.

The second destination was by Stambaugh Hall and the lot where Clark Hall once stood. Stambaugh Hall was closed Fall of 2019, but those who have lived there before its closure may know, or have even seen, a ghostly man walking in the bathrooms. Across from Stambaugh was Clark Hall which was removed as a residential building years ago. The ONU students who had lived there, however, claim a ghost named Phoebe haunted the space.

From these chilling tales, students moved on to Presser Hall and the friendly ghost, Brad. Those who practice music within Presser often see him swing the chandelier in the recital hall to the time of the music or they hear him bang on pipes. Many students who have classes within Presser can attest to Brad’s mannerisms and think fondly of the ghost.

Students walked from Presser to the darker side of campus where the woods are located. The students were informed of a death that occurred years ago within the woods. Few details were contributed surrounding the death as students walked along the Green Monster that follows the road through the woods. The spirit’s wails and cries were recognized, even replicated by the ghosts portrayed by SPC members.

Students were led to the final destination of the tour, Fraternity Circle, where the majority of the houses in the circle have been shut down. Students were warned to not look at the windows of the houses, as the two ghosts who haunt them may see and follow students back to their dorms.

The Boo Ambassadors led the students back to the Tundra at the end of the tour, where several activities were available for students. Students could draw on rainbow scratch paper in the shapes of skulls, cauldrons, gravestones, and more. Green apple caramel suckers were also available to students on the table. Students could play two games while waiting for the tours to commence, or once they returned from the tour. Cornhole boards were set up as well as the Witch’s Hat game, which is similar to a ring toss carnival game.

These games and activities gave students the opportunity to take a step away from homework and to relax, as this semester has been challenging to students. The Haunted Campus Tours not only gave students an opportunity to become more familiar with campus and it’s history, but the event was also a great opportunity to get students excited for Halloween.