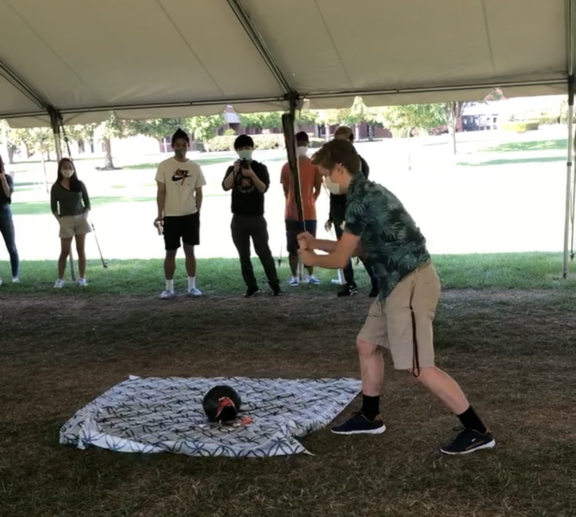 In Western culture, the piñata has become a party favorite. After all, who doesn’t love hitting something with a stick now and then? It’s also yielded more than its fair share of hilarious videos. In Japan, the piñata game has taken on a different twist. Instead of a papier-mache pony filled with candy, a watermelon is used. The tradition is called Suikawari.

The Japanese summer tradition, Suikawari, involves a group of people where a watermelon is laid out on a tarp and each participant receives one attempt to smash it open with a wooden bat. Before each participant goes in for the smash they are blindfolded and spun around ten times too add to the difficulty. As they are trying to gain stability from being dizzy, the rest of the participants help you move around and direct you to find the watermelon for perfect watermelon smashing aiming. After smashing open the watermelon the group of participants then celebrate together by eating the broken watermelon.

Here at ONU the Japanese Student Organization (JSO) put on a Suikawari event on September 25th on the tundra. The JSO had their participants smash water balloons along with one watermelons that everyone got a shot at to get the full affect. The reason for the water balloons is because of COVID-19, sharing and eating the watermelon would open everyone up to more contamination. Also being the watermelons would go to waste if they smashed them open and did not eat them, so majority of the smashing was directed towards water balloons.

At the event Conversing with a couple of the participants Kylie Cabana and Joren Kirsis, the event went very well and was a good turnout. Kylie came because she was intrigued and wanted to try the fun game of a different culture. She enjoyed it a lot, and all her friends were there cheering her on and supportively laughing at her. For Joren, he was very excited to see this event happening because not as many activities are going on because of COVID-19. Joren also got the lucky chance to actually smash the watermelon, when doing so he overestimated how hard he had to smash the watermelon and ended up cracking the bat. All ended up being okay though, luckily the JSO had some duck-tape handy. After everything, the event Suikawari heled here at ONU, was a great success. About 20-30 students showed up to participate and support the Japanese culture.

Overall, this event was something that brought all different kinds of people together to support the Japanese Student Organization. Suikawari was a great success, there was a wonderful crowd, and everyone enjoyed it. I mean who doesn’t love smashing things? It was obvious here at this event that everyone likes smashing things every once in a while. Bringing this Japanese tradition to Ohio Northern provided an escape for students and provided a delightful opportunity to experience something new.