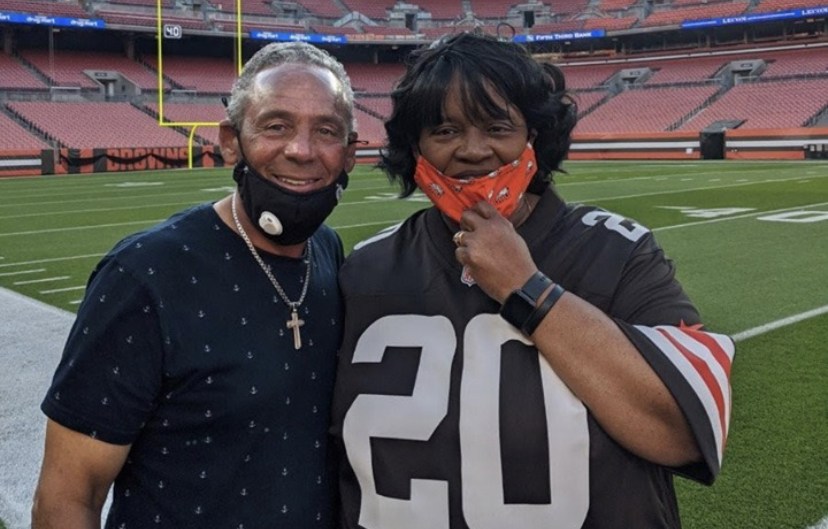 Dr. Adriane Thompson Bradshaw is the vice president for student affairs and dean of students. She is also the director of gospel assemble here at ONU. Dr. Thompson Bradshaw is known for her charismatic and empathetic personality. Her love for music started when she was a young girl. She grew up singing in her church choir and ensembles. Bradshaw had a musical family, with her aunts being church musicians.

Ohio Northern has many connections. One of these connections is with the Cleveland Browns and another is with Ohio’s Governor Mike DeWine. Mike DeWine is an ONU alum from the class of ‘72. ONU’s marching band has also performed for the halftime show for the Cleveland Browns Dec. 7, 2017. As director of student conduct and student discipline administrator, Chad Shepherd is not only good friends with Dr. Bradshaw but has also been a season ticket holder for the Browns for many years.

Due to Covid-19, the anthem had to be pre-recorded in an empty stadium to limit the amount of people on the field. According to Dr. Thompson Bradshaw, the recording process was a little less than an hour. She was asked to sing the National Anthem 3 times on a specific spot on the 50 yard line. They wanted her to sing the song in under 90 seconds. The stadium had  about 900 speakers, so when they played the video back it was very overwhelming to listen to.

Sept. 7 was not only the day Dr. Bradshaw pre-recorded the national anthem but also the first time she ever stood on the 50 yard line in FirstEnergy Stadium. Even though she couldn’t perform at the actual game she was given a Browns jersey with her last name on the back. This was a very memorable moment that a lot of people can’t say they have experienced.  Dr. Bradshaw said, “I felt privileged to be nominated, to be selected and to have the opportunity to sing for my hometown team.”

Dr. Thompson Bradshaw was born and raised in Cleveland, OH. Becoming a Browns fan was just expected from her as a Clevelander. Star running back of the Cleveland Browns at the time Jim Brown was one of her neighbors. Growing up she felt as if she had a special connection to the team.

During this year’s Browns football season, seats are only reserved for season ticket holders and with that they could have up to 6,000 fans attend the games. Because Dr. Thompson Bradshaw isn’t a season ticket holder, she wasn’t able to attend the actual game on Sept. 17, which was the second game of the season. Cleavand became 1-1, by winning against Cincinnati Bengals 35-30.