Covid-19 and the AIDS Crisis: ONU Alum and expert weighs in 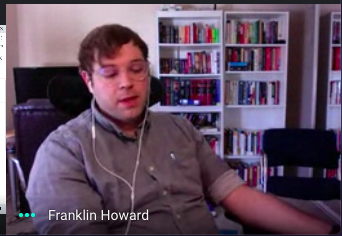 Phi Beta Delta students and members learned on Wednesday that the COVID-19 pandemic is similar to another recent infectious disease outbreak: the 1980’s AIDS epidemic.

Franklin Howard, a 2014 History alum revisited Ohio Northern University via virtual discussion to reflect on grad school and grant advice to undergraduates, as well as preview their research in HIV/AIDS, while comparing our current situation to the one just 40 years ago. Franklin Howard’s expertise is in American queer history and the AIDS Crisis, and they are currently an adjunct professor at Oakland County Community College.

Advisor Dr. Michael Loughlin began the event by introducing Franklin Howard and explaining their research as well as time spent at Ohio Northern University. From there, Howard discussed their time in graduate school and how ONU prepared them for their master’s program and PhD program they are currently working in.

Howard’s suggestions included learning to read difficult pieces of academic literature correctly, as well as conducting research on topics that you are interested in and that you believe other academic scholars would be interested in studying. Howard explains that they are gender queer
and use they/them pronouns, and part of their identity is what stemmed the interest in the AIDS crisis.

Howard discusses the difference between undergraduate and graduate school:

Howard explains that it was never an intention of theirs to research the AIDS crisis, they wanted to learn more about their community and ended up meeting a colleague at a Phi Beta Delta conference who was equally interested in the topic and decided to work on the project together from there. For them, the “lasting impact of the crisis is what I find particularly interesting and the way it shaped my community and the ways in which the memories of the crisis have been shaped for the last twenty years.”

In Howard’s research, they found many similarities among the COVID-19 pandemic and the AIDS crisis. Both administrations were slow to respond to the disease outbreak and Dr. Anthony Fauci was at the forefront of disease research. The Reagan administration was slow to respond to the AIDS crisis due to fear of the disease itself and the religious aspect that was essential to the core beliefs of conservatives and Reagan’s followers. For the first few years of the virus’ spread, President Reagan refused to acknowledge the existence of AIDS. Research was significantly underfunded and progress was limited toward understanding and preventing the disease from spreading. As a result, local organizations funded and provided help to AIDS victims that the federal government refused to do. Howard explains that The Gay Men’s Health Crisis was created to bring groceries and paying bills for gay men who were infected and ill from the virus.

Like the Reagan administration, state and local governments had to fund research and figure out ways to protect healthcare workers as well as patients by providing ventilators and personal protective equipment (PPE) without the federal government’s help or support. Howard points out that both administrations allowed Americans to die by ignoring science and research for political gain.

Howard explains that Dr. Fauci has become a “hero” during the COVID-19 pandemic, but in the 1980’s, he was anything but. During the AIDS crisis, Dr. Fauci would not expand testing or vaccine runs to help victims of AIDS. Howard finds this troublesome because he did not help society when gay men were dying of an unknown disease, but now he has suddenly become an activist for healthcare access and awareness of a problem. It could be explained as personal growth but Howard argues that Dr. Fauci was not as passionate about the AIDS crisis because it specifically spread and infected gay men, whereas COVID-19 is not as selective.