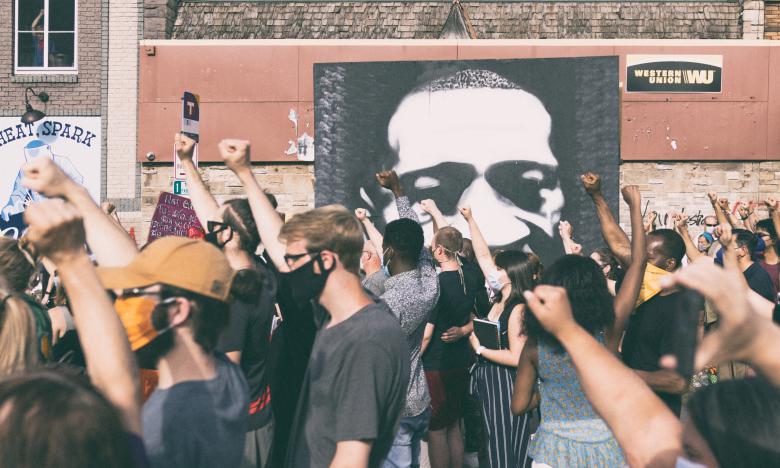 It is time everyone accepts that Black Lives Matter, and that includes the citizens of Ada, Ohio.

Throughout the past four years, there have been many controversies and chaos that have made me physically ill. From separating children at the border, to attacks on women’s rights, it seems as though many of the fears I harbored on the night of November 8th 2016 were rational. Last week was another instance where I was physically ill because of the chaos our President has encouraged and enabled throughout his term.

Last week, the world was enraged when we witnessed the murder of George Floyd by a police officer who held a knee to his neck for 8 minutes and 46 seconds and ignored his cries for help and began pleading for him to stop because he couldn’t breathe. The officer who murdered George Floyd and the three bystanders weren’t arrested until there was a national outcry for justice. I couldn’t watch the entire video because it made me angry and heartbroken. I was angry because I know this isn’t a new issue in America, and heartbroken because George Floyd lost his life due to a white man’s power trip. As a result, millions of men and women have filled the streets to protest police brutality and promote the Black Lives Matter movement.

Ohio Northern students were part of the historical protests. Oftentimes, it can feel hopeless to seek change in an area in which liberal ideologies are, to say the least, rare. Seeing others equally upset and angry with a system that disproportionately targets the black community is relieving, but I find it upsetting that it has taken most Ada citizens almost ten years to acknowledge that PoC and the black community are subject to racial bias.

As a privileged white woman, it is difficult to speak out on an issue that has never personally impacted me, but as I have learned within the past week, using your privilege is one of the only ways to end police brutality. In Ada, it sometimes feels like we are excluded from the rest of the world. As a “townie,” I know most of the police officers because I grew up and went to school with their children, as do the rest of Ada citizens. Most of us will never know what it’s like to feel uncomfortable around a police officer, let alone fear for our lives. We do not need to teach our sons to keep their hands in plain sight during a traffic stop. Most of the time, we are more worried about getting a speeding ticket rather than being murdered. That is privilege and we need to acknowledge that. Ada citizens need to put ourselves in positions that black boys and men are faced with daily in order to truly understand the Black Lives Matter movement.

I am proud to be a citizen of Ada and a student at Ohio Northern University. Last week, I witnessed both communities come together to bring about change for our friends and family of the black community. Some of the only diversity Ada has is because of the university. The university gives the community plenty of opportunities to access diversity that they otherwise would never experience. Ada citizens should take the opportunities that Ohio Northern grants them to educate themselves on police brutality and social injustices. These are small steps that can make big changes in the future, including protesting on Main Street.

Although to some Ada citizens, me and my fellow polar bears and “townies” looked like uneducated clowns protesting human rights violations in Ada, Ohio. I can’t help but feel like it is worth it to look at a clown for a few days and deal with a couple of middle fingers and rolls of coal to advocate to end years of oppression. We used our privilege to fight for those who cannot, and that is what we all must do right now. Everyone who values human life needs to support Black Lives Matter. “All Lives” can’t matter until black boys and men can walk freely down the street and not worry about being killed for looking different than the police officer who is supposed to protect them.

Donald Trump wasn’t the one who held a knee to an innocent man’s neck and suffocated George Floyd, but he certainly enabled their actions and looked the other way. Our President encourages violence against “criminals,” and has become a hero to many white supremacists throughout the country by claiming they are “very fine people.” Our country cannot continue on this path, especially black lives. We need to protect the lives of innocent black boys and men and now is the time to demand change from a system that has always been against them. Protest, donate and most importantly, VOTE. Remember how angry you felt watching George Floyd take his last breath. Remember that there are people who have to live in fear of being in the same situation almost everyday. Use the ballot box to express your anger at the system and use this time to finally change it.