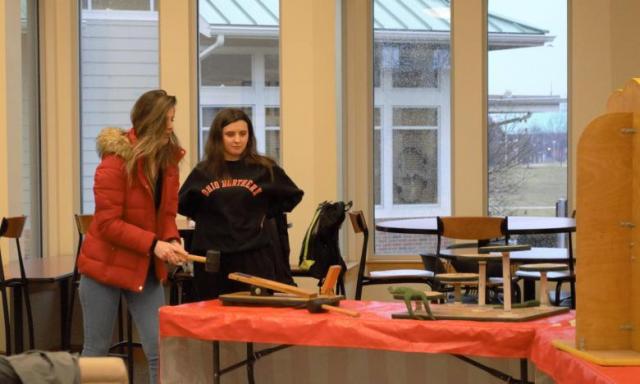 SPC hosted an event allowing students to relax and play carnival games right as classes built up before spring break. Klondike’s Winter Karnival was held in Affinity Commons Feb. 25. The Karnival was planned by an SPC event coordinator, Sam Hurlburt, who has previously helped coordinate events like Klondike’s Krafts in October and the Hawaiian Luau last August.

Students could participate in multiple games including a Bottle Ring Toss, Duck Pond, Frog Flip, and Hoop Shot. Unlike a normal carnival, the event didn’t have regulators to monitor the games. Students were free to play the games however they pleased without payment to participate. One of the bigger carnival games available was the Whack-A-Mole game. The game featured an inflatable table with light up pads that randomly lit up green or red. Two players play against each other, one hitting the green pads while the other hits the red with a plastic hammer until one has achieved ten hits.

These carnival games were provided by a company called Super Games, an organization that provides groups or businesses with the games and activities. SPC previously hired Super Games to provide activities for some of their events, including Fall Fest.

“We use outside companies a lot,” Hurlburt said. “It’d be expensive for us to buy the equipment all the time. Having that company for a couple of hours really is a blessing.”

In addition to the carnival games, students could also have cotton candy. Pre-packaged cotton candy made earlier during the event was available for students to pick up, but students could also request custom flavors of their choosing to be made. Some flavors included pina colada, lime, blue raspberry, as well as a mix of flavors. A candy bowl was set out for students throughout the event and background music was played as well.