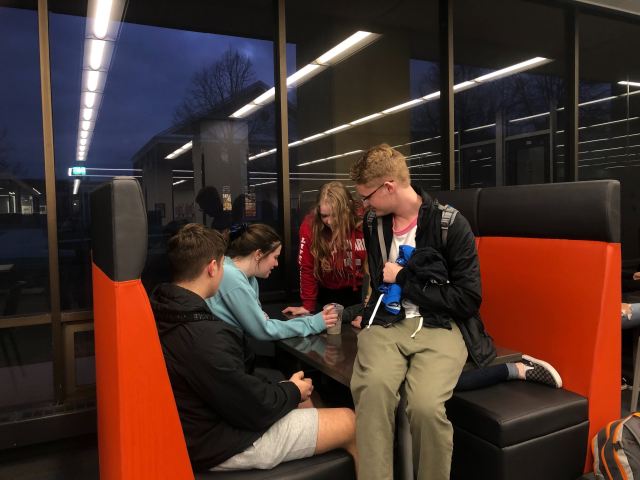 In response to the new coronavirus, or COVID-19, Governor of Ohio Mike DeWine held a conference call with college and university presidents to outline the next steps to prevent the spread of the virus. President Dan DiBiasio announced late last night, March 10, that Ohio Northern University would be taking further action to prioritize the safety of both students and faculty by suspending all face-to-face class lectures and large, public gatherings until April 17. The email said, “Starting on Monday, March 16, we are suspending all face-to-face instruction, with the exception of laboratory sessions for the remainder of the spring semester.”

DiBiasio said this statement was incorrect, and a follow-up statement today made this clarification.

“We intended to say that no face-to-face was also until the 17th of April, and we’ll reassess at that time,” the President said. “It may be until the end of the semester. All of these changes will be inside this time period, and prior to the 17th, we’ll evaluate and say, ‘stop it and go back to business as usual,’ or ‘we have to extend it more or the rest of the semester.’”

Governor DeWine told Ohio colleges and universities to convert to “full, remote learning for classroom situations” during the conference call. There was no recommendation as to how long this new protocol would last.

According to DiBiasio, that was left to the discretion of each institution’s administration. For large events, the recommendation was to either cancel them or prohibit public attendance. For spring sports, this ruling does not affect games or practices. Sporting events will simply go on without spectators.

Effective immediately, all student organizations and classes are to cease in-person interaction to allow for social distancing.

The CDC defines social distancing as “remaining out of congregate settings, avoiding mass gatherings and maintaining approximately 6 feet away from others when possible.” USA Today published a guide with various terms that have been used in the media’s coverage of the global spread of the virus.

Students and faculty were advised yesterday to discontinue all large gatherings—including student organization meetings. Whether or not the community got the message is a different story. ONU Student Senate announced today that all Senate activities and meetings are canceled from this point forward. Other student organizations are still taking advantage of the “transition” period prior to the official date announced in the email—March 16.

According to DiBiasio, the dining hall and other larger public spaces are allowed to remain open as they are less space restrictive than areas such as a classroom in which students are in close proximity. He said that while the decision to allow students to eat in a communal dining hall seemed contradictory, he said he was confident this was the right move to make. Additionally, residence halls were permitted to stay open as majority of housing complexes are suites or apartments in which fewer people live and have separate living spaces.

The entire campus community, however, has been frustrated and is concerned for the future of the semester as everyone comes to terms with the major repercussions this call will have on the University.

The team aiding in the decision-making process is a COVID-19 task force comprised of individuals representing several offices and services across the University including the director of health services, public safety, student affairs, residence life, academic affairs, multicultural affairs, and faculty with specializations in public health and epidemiology. Student representation will be covered by new ONU Student Senate President Nate Oblizajek.

The multi-constituent group will offer feedback, serving as a sounding board for the senior level staff when new information or updates become available. This body will also assess issues such as the cancellation of major events such as commencement or extending the remote learning period. Furthermore, epidemic procedures and protocols will be reviewed and updated to adapt to this ever-changing situation.

One of the primary concerns of both students and faculty is academics and the transition to online class instruction.

DiBiaisio said the University is very interested in maintaining academic progress while practicing good citizenship by helping Ohio mitigate the virus outbreak. He also acknowledges the struggles both faculty and students will face because of this major change.

“I am so reluctant to ask the faculty to shift gears so dramatically,” he said. “I know they understand and are going to do their best for their students, and I deeply appreciate that.

“It’s disheartening, but it’s also inspiring to know how many of them are trying their hardest to keep the course going and make sure the students can still learn in these alternative methods.”

Academics are not the only thing on everyone’s mind, however.

Events such as Honors Day, where programs and colleges recognize their students’ academic achievements, and Colleges Against Cancer’s Relay for Life have already been cancelled. Religious Life has had to cancel all programming including weekly chapel. Other large, public events such as the annual Undergraduate Student Research Colloquium and Commencement may be cancelled if the spread of COVID-19 continues to escalate.

Even admissions events such as the upcoming Orange and Black Day are already cancelled. While the president said ONU’s outreach to prospective students is always personal, he said sharing this news and assisting students and their families in answering questions about academic and student life was going to make recruitment all that more intimate and thorough. He said he was not worried about this decision affecting next year’s enrollment statistics as many students have already committed and submitted their deposits.

The financial implication is also applicable to current students who are wondering if the suspension of classes and the option to move back home means refunds for tuition and room and boarding. However, the University and many of its services will remain open during this period. At this time, the President said he is unsure how the University will address this matter. More information about this is to come at a later date.

“It’s a complicated analysis for how we would try to refund and on the other hand keep everything going,” he said. “That’s a challenge in and of itself.”

DiBiasio asks for students’ and faculty members’ continued patience and understanding, stating he has been “grateful to see that in abundance already.” He also said students’ safety and wellbeing is of utmost importance.

“Certainly there are some students who are very nervous,” DiBiaisio said. “I’ve talked to a couple of them who are immunosuppressors and for them something like this is very concerning—this type of environment, so we want to make sure we’re taking care of their physical needs but also their mental health needs as well.”

While it is still very unclear what the next steps are, the campus community is asked to be flexible and patient. ONU and neighboring schools share similar conditions right now, and there is no telling how the virus will continue to affect Ohio.

“I’m encouraged by the intelligence and attitude of our students, and they’re not disappointing me at this hour either,” DiBiasio said. “We want to be open to their ideas and questions. I’ve received a number of emails from students or parents [asking] for clarification or asking questions. And that’s good, that’s healthy. I like that two-way communication. We’ll get through this together.”