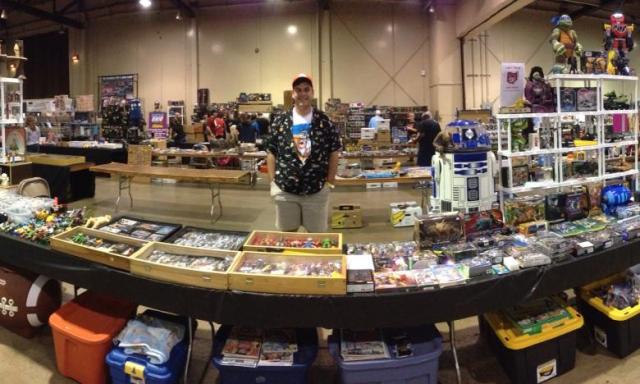 Warren Rehberg, a student of the ONU’s Dicke College of Business applies his knowledge from classes every day as he runs his own business. Warren is a collector and vendor of collectibles such as action figures, retro video games, comic books, pop culture, and much more while staying as a full-time student

Warren, the founder of Ohio Nerd grew up loving action figures and would expand his collection as he grew. He became a more formal collector as time went on and is extremely passionate about his collection. Unfortunately, a big blockade for his hobby hit when he went to college; the cost of his education is expensive.

“I got my first bill from ONU and it was very expensive. I basically said, ‘Holy cow I’m not going to be able to collect anymore because college is so expensive.’ That was not acceptable, I needed a way to keep collecting.”

Toy shows was always a homely place for the young collector, but he became a vendor to help with his college bills and to maintain his own collection. Selling off his doubles and extra parts that he did not need allowed him to feed his collection.

He grew fond of being a vendor at the toy shows as time went on, and the people he gets to meet through it keeps pulling him back. From meeting new collectors to seeing old friends, Warren loved the people around him because, “[Collecting] is not something you do to just be cool, it’s something you do because you love,” the genuine passion of everyone in this hobby keeps pulling him back.

You would think that running a small business while in college is stressful and time consuming, and Warren would partially agree with that as he describes, “once a month on Tuesdays I’d drive to Cleveland, which is obviously a school night, and I’ll get back here way to late, go to bed, wake up, and still get everything done.” He does this traveling to do monthly meet ups on top of the nine toy shows he is doing this year. Despite the time consumption, Warren is a firm believer it helps his classes in the end.

“Obviously there are times where it is stressful, but really I do believe it’s helpful. I’m living what I’m learning as I learn it. It really helps me to be engaged in my classes, because everything they teach in my business classes are relevant right now.”

Warren is a full time student who not only is running a small business but is also running the YouTube channel for Ohio Nerd, working on an untitled book about how to collect toys, and is working to bring a toy and collectible show to Mansfield, Ohio in June of 2021 called Mid-Ohio Toy and Collector Con. As a fellow student you might wonder how he can do all this work and how you could start your own business. Warren had some good ending advice on what to do: