Delta Zeta Sorority Raises Money to the Gift of Life 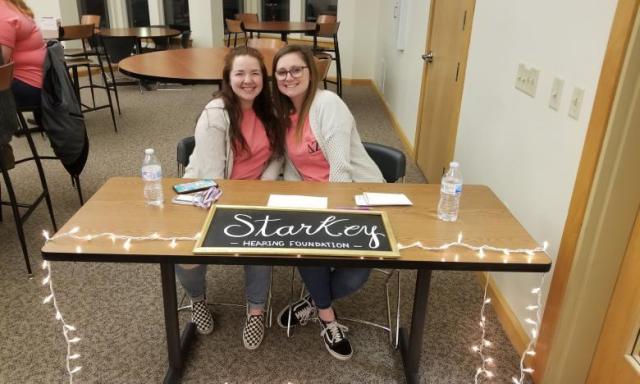 The Delta Zeta Sorority at Ohio Northern University has worked to help people to hear and speak for themselves for many years with a focus on hearing and speech since 1954.

Delta Zeta has been partnered with the Starkey Hearing Foundation since 2009 and raised over $5,000,000 for this foundation since that partnership began.

The group hosted a “Hot Cocoa for Hearing” event Jan. 29,  raising $199 for the Starkey Hearing Foundation. This will cover a hearing screening and almost a year’s supply of hearing aid batteries for a person in need of these services.

Vice President of Philanthropy Mya Rey tells us that she wants to do better next year.

“The gift of hearing is the gift of life,” founder of 20/20 Hearing and longtime supporter and partner of the Starkey Hearing Foundation, Jack McConnell, said.

McConnell has been involved in the Starkey Foundation for seven years.

At eleven years old, McConnell went on a mission trip with the Foundation to Ghana, West Africa. This trip changed his life. McConnell came away from this experience with an acceptance of his hearing loss, and a passion to further the outreach of this program.

“People in these countries are living in fear,” McConnell said.

One boy had been cast out by his family when they had discovered his hearing loss. He was very young when he was abandoned, so he grew up in an orphanage. He had no way to communicate.

He was fourteen years old when McConnell fit him with hearing aids. He heard his name for the first time. He jumped for joy and ran around the room saying the names of the other kids and hearing his name in return. This small metal instrument changed his life forever giving him the gift of communication.

“For me, a day here is better than any day on any beach anywhere in the world. It’s better than any fine meal in Paris. I would stay here and not eat at all and work for these kids and go home tired and say I had a good day,” Bill Austin, CEO of Starkey and founder of the Starkey Hearing Foundation, said in an interview with ABC News.

Austin and his wife Tani Austin have dedicated their considerable wealth and their valuable time to the fulfillment of their mission.

The Foundation has donated over 1.5 million hearing aids to date, and it doesn’t plan on slowing down any time soon.

ONU’s Delta Zeta chapter is a part of this mission to help give life to people who can’t give anything back.

“To me, having a heart for hearing means I am extremely grateful to be able to be hearing. Because of my ability to hear, the sisters of Delta Zeta have taken it onto ourselves to raise awareness for noise-induced hearing loss and to work together as a sisterhood to bring the gift of hearing to people around the world,” Alexandria Bowen concluded.