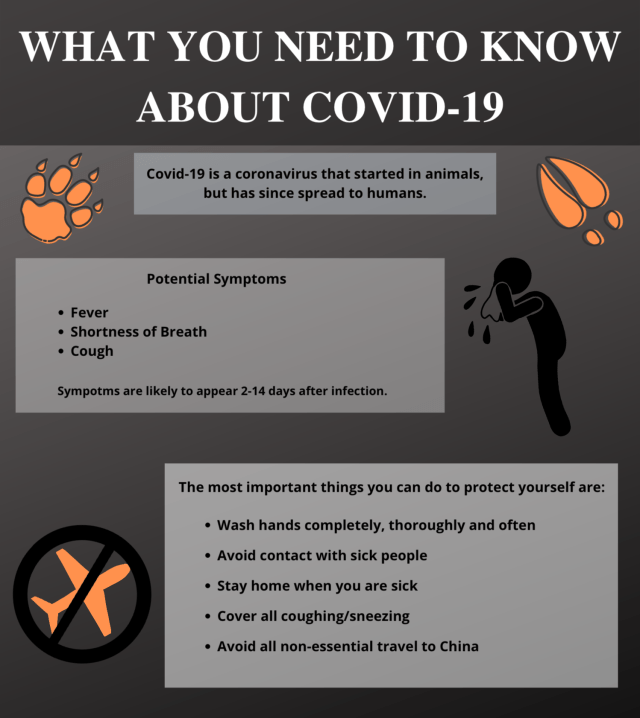 China announced in late 2019 that it had discovered a new strain of an animal-generated coronavirus, COVID-19 (formally known as 2019-nCoV) in humans. There have been more than 1,360 deaths in China and 60,300 infections globally since then, yet most of the discussion is based in fear rather than fact. In reality, there have been two other recorded instances of coronavirus migration from animal to human.

Coronaviruses occur naturally in both humans and animals but rarely crossover. According to Dr. Rod Anderson, an ONU-based microbiologist, the difference between human and animal coronaviruses exists in the virus’s covering. There are different proteins that allow the virus to penetrate and latch onto vulnerable tissues; if they do not match correctly, they cannot infect the host. Crossover viruses are given a wide berth is that researchers cannot give a definite answer as to how the mutation has changed the virus itself until they infect enough people.

One of the crossover viruses is Middle East Respiratory Syndrome (MERS-CoV).  MERS-CoV is transmitted through respiratory secretions created when hosts sneeze or cough. People who are at most risk are those caring for infected individuals without personal protective equipment (PPE) like face masks and gloves, or those with direct contact with camels. This virus is largely contained in the Arabian Peninsula.

Another crossover virus is the one associated with Severe Acute Respiratory Syndrome (SARS-CoV). SARS-CoV began in Asia in February 2003 and spread to more than two dozen countries globally. A total of 8,098 people were infected and 774 died; only 8 people in the US became infected, but all of them had traveled to places where SARS was spreading. Like MERS-CoV, this virus was spread through respiratory secretions. At risk individuals were those who cared for/lived with infected people without use of general hygiene practices. Known cases were quarantined, and no cases of SARS-CoV have been reported since 2004.

The original sample of COVID-19 from China is genetically similar enough to those in the US, so much so, that it is likely that the infection was started from one single animal reservoir. In addition, further analysis has proven that COVID-19 is significantly similar to SARS-CoV.

Using the information on these two crossovers and normal human coronavirus behaviors, the Center for Disease Control (CDC) and World Health Organization (WHO) have determined the course of action for battling COVID-19. All persons should obtain the flu vaccine to reduce the potential strain on the immune system, and since the symptoms are similar enough to the flu (persistent cough, sneezing and fever), there is a possibility for false alarms. Also normal protective measures should be followed. Healthcare providers should use PPE in all potential intake cases. In addition, China has been placed on a Warning Level 3 by the CDC where all nonessential travel is recommended to be avoided.

The current Presidential Proclamation forbids entrance of foreign nationals who have visited China in the past 14 days; and requires all American citizens, lawful permanent residents, and their families who have been in China within the previous 14 days, to be redirected to one of the 11 airports to undergo a health screening. Depending on their history and current health, they may be placed under some level of movement restrictions for the remaining 14 days since they left China. However, those who have been in Hubei Providence within the past 14 days will be placed under some level quarantine regardless of current health.

However, in order to understand the likelihood of viral spread, we must start with understanding the environment where it first appeared. Wuhan is the capital of Hubai providence with a population of more than 11 million people in 3,280 mi2 for an average of 3,350 people/mi2. In comparison, New Orleans has an average of 3,650 people/mi2.

Viruses that spread through respiratory droplets are much easier to spread when in close contact (6 feet or under) from direct contact with mucosa (eye, mouth or nose), or potentially when these droplets are left on surfaces, touched and introduced to the new host’s mucosa by that host touching their face. It is currently unclear if COVID-19 can be spread through the latter.

Dr. Steven Leonard, ONU’s resident Infectious Disease Pharmacist weighed in on the possibility of further spreading through the US. The identified individuals should not be able to spread the virus if they remain in quarantine and the personnel who interact with them take appropriate precautions. “The issue is that there are likely many people who are actively infected who have not been identified and put in quarantine, especially outside of the US.” The general American public is unlikely to have contact with the virus, but the information on this virus is rapidly evolving. In the meantime, the general public should remain attentive to the information being given from reputable sources such as the CDC.

It is also recommended that healthy individuals avoid face masks as it can increase public hysteria, while those exposed should wear masks to help prevent the spread of respiratory droplets. Masks are also important for healthcare/personal care workers who are caring for infected patients. “The best preventive measures are to stay away from people who are sick, wash hands, stay home when sick, and cover coughs and sneezes,” Dr. Leonard advised. Any individual who is worried that they may have the virus should follow the prescribed CDC interim guidance.