The Chapel and Its Bagpipe Playing Chaplain 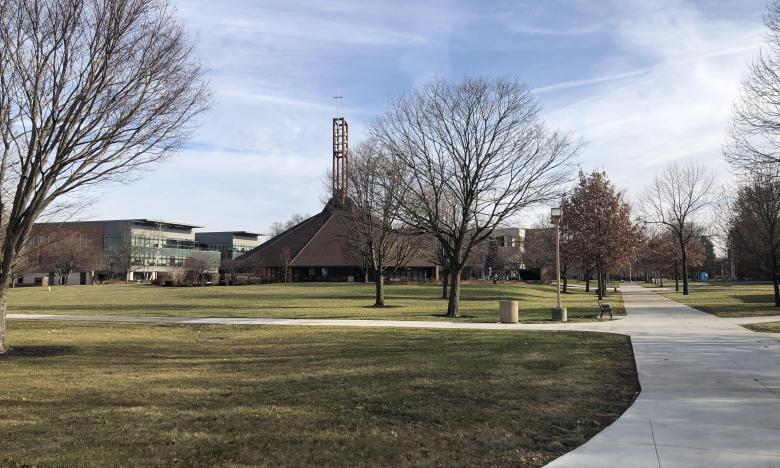 The centerpiece of the Ohio Northern campus is the Walter and Marian English Chapel. A place where students of all or no religion may come and call home. It was no mistake that, when the chapel was built in 1971, it was placed in the middle of everything across campus. It is as close to Maglott Hall as it is to the infamous Lehr Memorial building. In essence, the chapel’s location signifies that is accepting of all by being equidistant from everyone and everything.

It is much more than a place to go for a Sunday morning service. s University Chaplain David MacDonald provides and supports many beneficial groups to students through its program called Religious Life, a group for students of all religions and organizations to come together as one. The Jewish Union, Northern Christian Fellowship, Habitat for Humanity and Muslim Student Association are just a few groups that can be named. They embrace attributes of strength, relationships, diversity, fellowship, family and support through Religious Life.

This is not the only uplifting aspect of the chapel.

This winter, members of the English Chapel worked together to create what they are calling a “giving tree.” It is a Christmas tree covered from bottom to top with a variety of knitted winter apparel.  There are multitudes of gloves, hats, and scarves made for the local elementary school who may have forgotten, or do not have, this kind of clothing to shield them from the frigid weather. Chaplain MacDonald along with a group of faculty members have personally knitted many of the items up on a Christmas Tree.

MacDonald has also taken students on a variety of interfaith trips to increase their knowledge of other religions. Last year, they went to the cities of Cleveland and Columbus where they attended service at a local Mosque, Synagogue, Catholic Church, Orthodox Church and Methodist Church. All the members were able to come together and discuss the similarities and differences between each place of worship to broaden their view on the various religions in the world.

None of these groups, activities or even the Chapel itself would have been possible without the local United Methodist Church.

In 1899, the University was running out of money and needed saving. The nearby United Methodist Church was coincidentally looking for a partnership. The church provided the University with its denominational affiliation.

From that point on the school’s president, who was also the acting minister, would hold service in theLehr Memorial Hall auditorium for students and faculty members. That was until the 1960’s when the school hired its first president who was not a minister.

The university was forced to hire a chaplain. The man who was hired worked to convince the University to build its first chapel. In 1971, the English family, who were great benefactors of the University, came through with the money to construct Ohio Northern’s chapel, dubbing it the English Chapel.

Mr. English was on the board of trustees for Ohio Northern, and his wife, Mrs. English, was a strong supporter of students and academic affairs. Together they created a scholarship for students attending seminary school.  The English Scholarship covered the cost of seminary school for Chaplain MacDonald.

Chaplain MacDonald started at Ohio Northern University in 2012 after serving several different United Methodist churches in Northeast Ohio. He is the religious leader on campus and an integral part in many of the activities and organizations at the chapel. This role allows the Chaplain to do what he considers to be the most fulfilling part of his job.

“I think the opportunity that I get to interact with students, and to really help students to dig deep into their lives and unpack some of the things they’re going through in their experience here at college” is what he considers to be his most fulfilling role.

The Chaplain calls his area of expertise “spiritual direction” and said he is willing to help people of all religions, or no religion at all, through difficult times. He has a love of helping individuals build bridges with people whom they may not have interacted with without his help. MacDonald also has some rather interesting hobbies in addition to his caring personality.

The University’s Chaplain shared some insight into his love of bagpiping and knitting.

He, along with a professor and two spouses of professors, meet every Sunday to play the bagpipes together. MacDonald claims that he finds it rather relaxing and enjoyable due to his Scottish heritage.

His love of bagpipes is rather new compared to his other hobby, knitting.

Chaplain MacDonald has been knitting since he was 15 years old. He says that when his mother was teaching his sister he asked her, “Can boys learn to knit?” and she said sure. Fast forward to today and he has entered some of his pieces into the Hardin County Fair and won ribbons for them.

All hobbies aside, Chaplain MacDonald said he would like to give one important message to the students of Ohio Northern University.

So, if you see him milling around campus on Friday in his kilt or hanging around the Polar Espresso coffee shop, just know that he is a willing, listening ear and will gladly sit and talk with you about anything you need to get off your chest.