Greek Life Shares Importance of Philanthropy and Service to Others 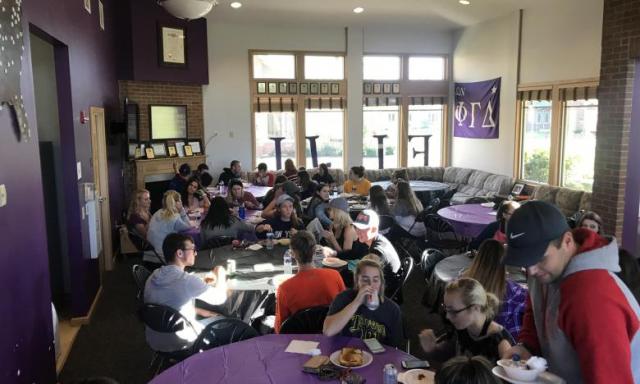 With Greek Life recruitment starting up, a key part of joining Greek organizations is participating in the service and good works they do for their campus and surrounding community.

Philanthropy is defined as the desire to promote the welfare of others, expressed especially by the generous donation of money to good causes. Fraternity and sorority members take pride in dedicating creativity and free time to hold philanthropy events.

“Philanthropy is important because as a group we are helping organizations contribute to causes that are important for groups of people. Alpha Xi supports Autism Speaks, and we directly impact children and their families to help educate and provide services for kids with Autism,” said sophomore political science major and member of Alpha Xi Delta Kennedy Cook.

Junior political science/history major and member of Sigma Phi Epsilon Jacob Stiger  said, “Philanthropy makes me feel like I am contributing positively to something bigger than myself; we are giving something back to society. It feels satisfying to work directly with people because it allows us to gain context about the world around us and reminds us to not take our opportunities for granted.”

Lilly Hirschfield, a sophomore criminal justice major and member of Delta Zeta agreed that philanthropy works make her feel like she is a part of something bigger than herself. “Participating in philanthropy leaves me with satisfaction. I am putting others before myself, and those selfless acts build character and allow us to be contributing members of society.”

Philanthropy events are open to all of the surrounding community, including professors and townspeople. After each event, the organization gathers all profits made and donates the money to a charitable cause.

Each organization primarily donates to their individual philanthropy; however, they are not limited and can donate to other philanthropy foundations. Sam Honaker, a sophomore public health major and member of Kappa Alpha Theta said that doing philanthropy makes her feel purposeful.

“I’d like to think that by doing philanthropy projects we can all become a little more selfless.” she said.

“Greek-letter organizations do philanthropy because it is a common interest －especially when you think of the founding members of your organization, it becomes a way to build comradery and work towards a common goal,”  said Michelle McCalmont a senior nursing major and member of Alpha Phi Omega.