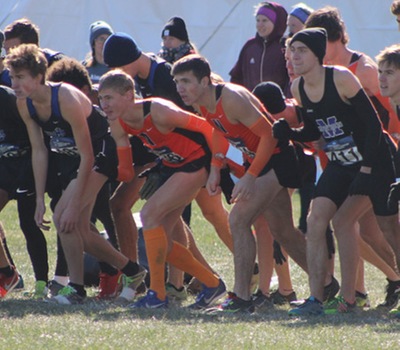 Ian McVey played soccer his whole life up to his high school career. He felt as if his high school coach wasn’t giving him the necessary time of day to become a better athlete. It was around this time that McVey transitioned into running cross country his junior year of high school. This would lead him into his cross country career in college.

Running was one of McVey’s main focuses when starting at Ohio Northern. He intended on being determined to set and accomplish goals while participating in the program. This intent to become better and the drive for greatness pushed McVey into cross country seasons that would eventually break records and give him the recognition he has today.

His freshman year started with him being placed among the top seven runners on the team. By the time the season was over, McVey ended first. This wasn’t an easy task; especially being his first year. McVey was able to find some help though by taking advice from runner Eric Wymer. Wymer took McVey under his wing and shared advice that would help motivate McVey to keep going.

There was a huge learning curve freshman year. You just have to absorb information from the upperclassmen and go.”

The cross country team had a chance of going to nationals moving into McVey’s sophomore year.  He was nervous but determined to represent the team as best as his abilities would allow. It was a feeling that he couldn’t describe. The feeling of an opportunity for greatness paired with the pressure and responsibility of giving his all athletically.

McVey was now an upperclassman starting his Junior year and he wanted to set an example for the younger guys. “I transitioned from being a learner to a teacher. I wanted to help the new runners anyway I could.” McVey was starting to make himself a bigger component of the program while also making a name for himself in the bigger races. He ended his junior year with a conference, regional, and state title.

The biggest struggles for McVey in the height of his career was staying healthy and finding the time to get necessary sleep. “It was mainly an issue during track season, but there were a couple times during cross season that I wasn’t feeling my best.” Illnesses would affect McVey’s breathing and throw him off during races and practices. His lack of sleep also played a role, especially during his later years. “It hard trying to find time to get rest being an engineering major.”

The major titles under his belt set the bars high for McVey’s senior year. He didn’t want to accomplish so much during his junior year to only have a lackluster final season. “I had to go for it; it was my last chance.” At the time of the interview, McVey stated he had the conference and regional titles. He wasn’t aware if he was getting the state title.

Looking back now, McVey wished he had done some things differently throughout his career. He developed better work habits and had workout routines that he wished he would have started earlier in his career. “If I had done those things earlier, I feel like I could’ve done so much more in cross. But my whole career just flashed by. When you’re a freshman, you take those things for granted.”

Over the course of his time here, McVey developed a working relationship with Head Coach Jason Maus. Maus and McVey keep in touch and stay informed on how McVey progresses. This level of coach-athlete communication is what McVey claims led him to success.

I don’t know if I could’ve done the things I did at another university.”

This communication is also what’ll keep McVey coming back for more events. McVey hopes to participate in alumni races and stay in contact with teammates and the coaching staff.

The four-year span that is McVey’s cross country career flew by before he could even notice. McVey has given it all and made what is his award-winning career today. He made time to teach the underclassmen runners to share the information and memories he has made. This effort will one day make the next Ian McVey.