Seeking Artistic Professionalism; What I learned from spending a weekend with an international solo violist. 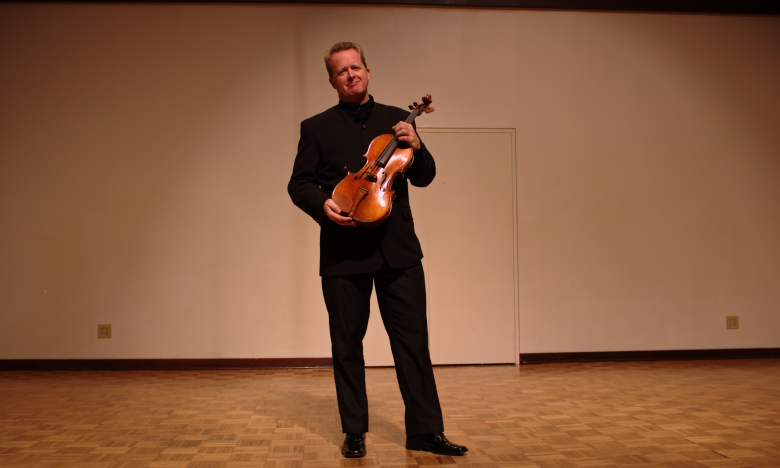 Do you remember the moment that you realized what you wanted to be in life? What was that moment; when was it? Did it happen yet?

For Brett Deubner, an international solo violist, that moment was clear. Nine years ago, Brett walked onto the stage in front of the New Jersey Symphony Orchestra to perform a then-new viola concerto composed by Lalo Schifrin. Looking out at the audience, and hearing their applause, Brett was filled with a sense of pride and accomplishment he hadn’t felt before, and at that moment he knew he wanted to keep doing that for the rest of his life.

Over the weekend, Brett stayed in Ada in order to work alongside the Ohio Northern Symphony Orchestra, which performed Cecil Forsyth’s Viola Concerto in G Minor on the evening of Sunday, December 9. Leading up to the concert, I sat down with Brett over Saturday lunch and dinner to uncover more about the life and thoughts of such an accomplished musician. What I did not expect to uncover, however, was my own preconceived notations about passion and fervor for life’s most simple pleasures.

Unlike Brett, I cannot think back to a particular moment in which I determined what I wanted to dedicate my time and energy to for the rest of my life. For many years, starting in late middle school, and ending in my senior year of high school, I wanted to be a music educator. I spent my spare time in countless ensembles, learning multitudes of instruments in different contexts, and ultimately ending my high school experience with a work-study program teaching middle school band students. Anyone that knew me knew that music was my passion, but no one that knew me could explain why when it came to committing to a university and program of study, I opted out of studying Music Education at Michigan State and instead chose to study Philosophy, Politics, and Economics at Ohio Northern University.

When I shared this small tidbit about almost being a music major with Brett, he didn’t dismiss it as an inevitable choice that almost every student makes, instead he asked, “Why?”. My voice felt timid, as I realized just how petty my answer felt standing in front of a man who has toured the world playing his instrument. “I was afraid I wouldn’t find a job,” I told him. From that moment, the discussion that I thought would be centered around his perception of the art music industry changed to a focus on what it means to be an artist in a world that seems to devalue the profession.

Talking with Brett, it became clear that he was acutely aware of the fact that American artists are often overlooked and underappreciated. In our discussion, he explained that historically, art music has been marketed for the appreciation by the wealthy and the church-goers. But now that America’s demographics have shifted towards a skewed income-distribution and fewer churchgoing citizens, the demand for art music has changed.This has lead to the perception that the arts are dying, and in order to avoid the consequences of that, young people shouldn’t consider the art industry to be a reliable and successful industry to work in. Speaking with Brett, I gathered that he thinks the absolute opposite is true.

Instead of steering away from the arts like a kid with lice, Brett thinks that it’s a noble endeavor to try and mix professional careers with artistic ones.

Perhaps instead of accepting the demise of orchestral concert attendance, young people should look into reshaping the industry so that concerts can be attended from the comfort of someone’s home- an effort which will undeniably require an understanding of communications and technology. Maybe instead of assuming that orchestras aren’t a profitable commodity, young people could consider reimagining how orchestras and wind ensembles earn their income- an experiment which could be spearheaded by political science and finance students.

Brett’s perspective was one that I hadn’t heard before, and certainly listening to it made me think about my own academic and career choices. Since graduating high school, I’ve been fixated on compartmentalizing my life into professionalism and artistry- during the day, I’m a student studying academia, and in the evenings, I’m an artist sitting in a musical ensemble. But perhaps that compartmentalization is the very reason that I haven’t determined what I want to do for the rest of my life. Since declaring a major in Philosophy, Politics, and Economics, I’ve been set on excluding music, an undeniable passion of mine, from my professional life- but what if I should be including it?

Not every person with an artistic passion needs to dedicate their entire life to the performance or creation of their art. For Brett, he knew that he would be happiest performing viola in front of orchestral ensembles across the world. But I know for myself, I’m going to be happiest in a more traditional position of employment where I feel a stronger sense of job security. I assume that there are many other would-be artists in the world that realigned their career goals to better suit a concept of professionalism or job security.

Perhaps, the best option for those skeptical of a career in the arts is to use their creative mind to synthesize a new career path for themselves- one that lies somewhere between artistry and professionalism- one that I would call a path of artistic professionalism. Artistic professionalism to me would be choosing an academic degree over an artistic one and then using the skills learned there to benefit the arts. As a Philosophy, Politics, and Economics major, I’m nowhere near qualified to become a music educator. However, I do possess specific skills that would allow me to assist a community orchestra in applying for government grants. A Computer Science major may have given up years of technical painting skills, but they now possess the skills to help an art institution upload their galleries onto an online-viewing platform.

Career professionalism and artistry are not mutually exclusive, but it appears that society wants to- ironically enough- paint the picture that way. Here, you can find a recording of Brett discussing the very topic of choosing practicality over passion, a problem which I feel plagues the psyches of too many college students. I would encourage taking the time to listen to this lecture- which is about 50 minutes in length- when you have the time. You can do it in the car, you can do it while preparing dinner, or you can do it while laying in bed. No matter where you do it, I think you’ll benefit from hearing his perspective. I know I certainly did.