Melinda McIntosh is a triple threat at Ohio Northern University 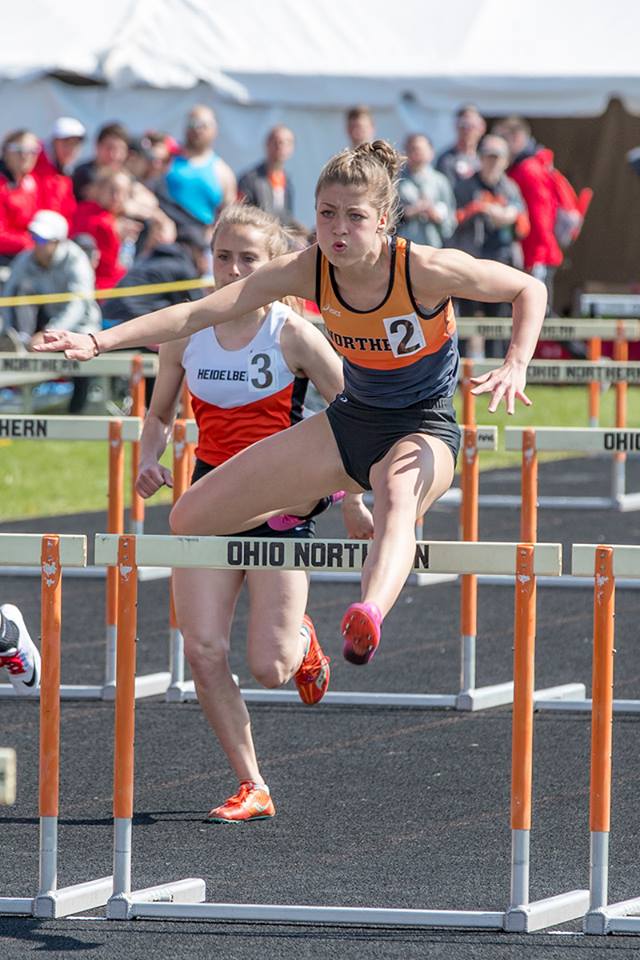 Melinda McIntosh makes juggling her academics, a varsity sport, and being on the executive board of a sorority  look easy.  She is a highly involved and passionate student at Ohio Northern.

Melinda is a Junior Criminal Justice and Psychology major with a Communications minor. This major is driven by her father who is a detective. This a field of which has always been her interest.

Working for the DEA or in evidence is something that Melinda will possibly pursue in the future. She states one challenge of this major, “It’s a very broad field, so there are endless opportunities for jobs which is good, but not when you’re trying to narrow down your choices.”

Part of Melinda’s decision to attend Ohio Northern University was founded in the desire to be a part of the varsity Track and Field team. Melinda has been running track since 7th grade. The 2018-2019 athletic season will conclude her 9th year competing in this sport and she has always competed in hurdles.

This varsity team competes in both an indoor and outdoor season. Track practices are every day from 3:15 to roughly 6:00, sometimes later during the season. Practices take place primarily done on weekdays because weekends are reserved for track meets. Each practice is dedicated to enhancing the athletes in a particular manner.

Mondays and Thursdays are designed to improve speed and event work days. This means athletes are wearing spikes, working faster and at higher percentages, jumping hurdles and lifting. Tuesdays are dedicated to hard workout days. Wednesdays are recovery days for the athletes. They complete circuits and run slower with more focus on form. Fridays are pre-meet days where the athletes focus on stretching and complete light med-ball throws.

Melinda competes in short and long hurdles, occasionally open 200, 400, and even javelin. She is a versatile athlete and an asset to Ohio Northern’s track and field team.

Melinda’s goal is to place top three in hurdles in both the indoor and outdoor season.

When Melinda isn’t studying for school or running around a track you can find her with her Zeta Tau Alpha sisters. Melinda has been apart of Zeta Tau Alpha for two and a half years.

When asked why she chose Zeta over the other sororities she said, “I chose Zeta because I immediately felt a connection with not only the girls, but with our philanthropy as well. Breast cancer runs in my family so I understand the importance of spreading awareness and education.”

This past year Melinda served as Vice President of Membership for her chapter. In this role, Melinda was in charge of running recruitment for a new class of sisters.

She was recently elected as the new president of Zeta Tau Alpha and will lead her sisters for the 2019 school year. Her goals in this role are to increase chapter moral as well as increasing involvement in campus and chapter events. She also strives to achieve a  “Crown Chapter Award” which is given to chapters by Zeta’s nationals.

Sorority sister Sierra Prince says this about Melinda, “Mel is a strong leader, a go-to sister and just an overall amazing human being. She takes initiative in whatever she does, but knows how to count on others as well. ZTA is so bless to have her as a leader and a sister.”

Possessing these leadership opportunities have helped Melinda grow and says, “It has truly helped me become more confident and improve my leadership skills.”

Melinda is also secretary for Student Athletic Advisory Committee. She is a member of the Psychology, Sociology, and Criminal Justice club. She enjoys these organizations saying, “It gives me a voice in my athletics as well as my major.”

Melinda is a well-rounded student and athlete who strives to achieve many goals in her time at Ohio Northern.