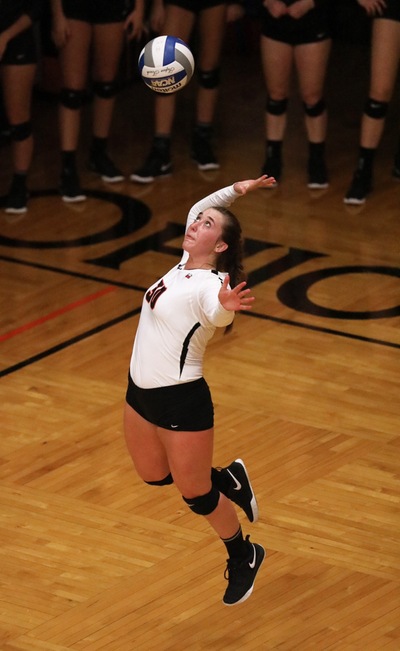 “The volleyball program has a strong culture of teaching girls about life and not only volleyball. Everyone in the program is trying to mold the players to become not only the best athletes, but the best people we can be.” This is what sophomore Jordyn Heitbrink initially responded with when she thought about being a part of the Ohio Northern Women’s Volleyball team. The program has a reputation of being successful. Especially in their athletic conference.

The Volleyball program here at Ohio Northern is coached by Kate Witte. She has built up a program that is strong and successful. Coach Witte recently finished her 28th season of being a head coach at Ohio Northern. During this time she has earned 17 OAC regular season titles and 13 OAC Tournament Championships. Witte has led her team to the NCAA Division III Tournament a total of 21 times. This includes one run to the Final Four. Her outstanding coaching ability is proven with her impressive record of 693 wins to just 227 losses.

This 2018 season was no exception to her success.

The team completed the season with a winning record of 22-8. The final loss of the season came to the number eighteen ranked team, Wisconsin-Whitewater, in the first round of the NCAA Tournament. The season may have come to and end sooner than most had hoped. The season and the growth shown throughout, however, was enough to end on a positive reflection.

The volleyball team experienced challenges more than once this past season. The first one was after the very first game of the season when the Polar Bears took a tough loss to Thomas More University in a thrilling five set match.

The second challenge arrived just 5 games later when the Polar Bears were matched up with Thomas More yet again in the Bluffton Spiketacular. Again Ohio Northern came up short with a loss in 3 sets. With much determination and improvement The Polar Bears were able to rally back and earn victories the next handful of games.

The volleyball team was faced with adversity still again this past season. The Polar Bears unfortunately went on a streak of three losses in the second half of their season. Each loss was taken by very competitive and successful teams. The Polar Bears did not give up there. Through more practice, dedication, and focus they were able to bounce back and dominate in the next seven consecutive wins earning the OAC Conference title.

It is not all about the wins and losses though. There is more to volleyball than simply the records and statistics that prove this program’s success. Heitbrink’s earlier reflection of the school’s program proves that. The players Coach Witte recruits and brings to Ohio Northern are the reason for the continuous positive outcomes.

McKenna Hostetler is a perfect example.

Hostetler is a junior athlete for Coach Witte. She has received much playing time since entering as a freshman three seasons ago. She currently has earned three varsity letters. Hostetler plays a defensive specialist position. In the previous season Hostetler earned the position of being the team’s libero. Her skill level has set her apart from her teammates allowing her to become the libero.

Hostetler had much to say on what it means to be a libero of her team. Hostetler explains in the audio piece below why being a libero is special to her.

Hostetler had a total of 540 digs this previous season. That puts her average at just under 5 digs per set. Being a presence in the back row is not the only outstanding talent for Hostetler. She also had 43 service aces tallied for her junior year.

Hostetler accredits volleyball itself for bringing her the talents she has. “Volleyball has been my life since fourth grade and has brought me so many of my best friends. It also has taught me so many different lessons. I learned the importance of teamwork, communication, passion, and dedication,” explains Hostetler.

Hostetler’s outstanding skill and competitiveness is apparent as she is on the court for six out of the six rotations. This is evident to spectators and coaches who watch her play. But her teammates look up to and admire her as well.

Fellow teammate Heitbrink adds, “Kenna’s leadership shows through in her accountability. She’s always the person you can count on to get things done and do them the right way. She also is constantly making sure the people around her do that too.”

Hostetler’s influence on her teammates has earned her another privileged position: team captain. A spot she rightfully deserves.

Hostetler describes her experience as being a junior captain for the Lady Polar Bears, “Being a captain is an incredible honor. Being a captain is a different experience because your teammates look up to you whether it is when a drill isn’t going well or for school advice. It makes you work harder and become better because your teammates will look to you to see how hard you are working or how you react to a situation. It is your job to be the glue for the team.”

It is fair to say that Hostetler has become a strong component of the volleyball program. Both her leadership and skill has made her name known and respected. She has accomplished so much in her career at Northern so far. And she is not done yet. Coach Witte and all Polar Bear fans are excited and looking forward to Hostetler’s senior debut next season.