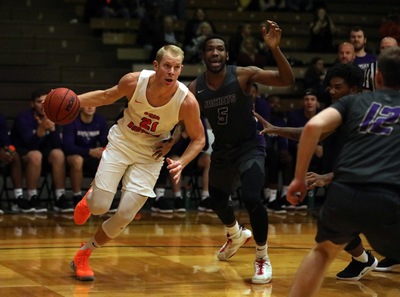 Playing basketball has been something he has done for many years. It expands all the way back to the fifth and sixth grade league and into to junior high. Not to mention the impactful four years of his high school basketball team.

Bruns recently began his fourth and final year as a Polar Bear on Ohio Northern Men’s Basketball team. But his departure will not go unnoticed.  Bruns athleticism, skill, and size all contribute to his success on the court.

This was proven on the week of November 19th when Bruns was named Ohio Athletic Conference player of the week. This honor was rightfully earned after Bruns had averaged 26.5 points and 8.5 rebounds in two victories past both Defiance and Denison the previous week.

Bruns explained, “I’m very honored to receive the award of player of the week. It means a lot to me to be able to receive that conference award.”

Fellow senior teammate Grant McConnell credited Bruns saying, “He had very impressive performances that week on both the offensive and defensive sides that helped us pick up a couple wins.”

Earning OAC player of the week is only one of many honors Bruns has received. But it comes with a price to pay. There is a lot of time put into being a successful basketball player. Bruns puts in a great amount of time in the gym outside of practice time. On top of that there is continuous weight lifting workouts to complete each week. School is a top priority as well. Going to class everyday and being a dedicated student helps contribute to his success on the court.

Playing basketball has always been a hobby for Bruns. It has become more than that since starting his collegiate career. Bruns plays for a lot more than his love for the game. It is also for those who follow and look up to him. He especially has one fan in particular. A family from Bruns’ hometown often comes to support him at his games and one child specifically looks up to the player Bruns has become.

Bruns was interviewed last year and he briefly spoke about playing as a role model.

Not only is Bruns’ hard work evident to spectators. His teammates think highly of him as well. “Even though Ryan is obviously a very talented player, he never puts himself above us. He never slacks off and holds himself just as accountable as the rest of us, if not more,” boasts McConnell.

The league is going to be competitive this year. Surely Bruns’ impact will help lead the Polar Bears into many wins within the conference play. Bruns included, “I am looking forward to seeing how all of the teams around the league will do. It’s always interesting seeing the scores and what players do well in each game. I will continue to put in extra time at the gym shooting and working on my basketball game all around and see where the season leads us as a team.”