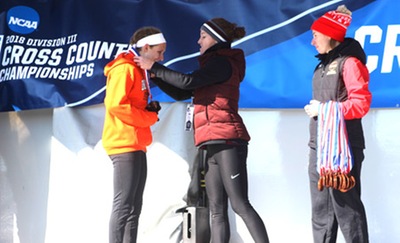 Coach Jason Maus was impressed with the top-10 finish for his team.

“With the group we have and as young as we are, a top 10 finish in the Region was a goal of ours from the very beginning of the season. I thought we raced pretty well, and the team felt like they bounced back pretty well from the [Ohio Athletic Conference (OAC)] meet two weeks prior,” Maus said.

Two-weeks prior at the OAC Championship in Alliance, Ohio the team did not perform as well as Maus would have wanted.

“We did not handle the situation, the pressure nor the weather and course conditions very well. Sometimes with a young, inexperienced group, that will happen,” Maus said.

To combat the performance at the OAC championship, the team came back to fight for a great overall placement at Regionals.

“We responded well and came back to run very well at the Regional meet.” – Jason Maus.

“I was really surprised honestly. I was not expecting to place that high up,” said Whitmore

Whitmore was pushed by her coach to reach for top-35 and when she was actually able to reach the finish line in top-35 she was so excited.

“I was shocked. I ran a personal record as well,” said Whitmore.

The freshman has high hopes for her track season and is hoping to qualify for regionals during cross country season next year.

“Rue had a tremendous first year; she made the adjustment to college running very well.” Maus said. “We’ll sit down and talk about continuing to grow and develop in the program, but I think she has the potential to have a very good career here at ONU.”

Maus said he is optimistic about the growth and skills of the team in the next coming season.

“The future is bright for the Women’s Cross Country team,” he said. “We gained some valuable experience. If we can add some strength for next year, I think we’ll be very competitive in the state, conference and region.”

The team will keep six of the eight current women and will continue to grow until meets start up again in Fall of 2019.