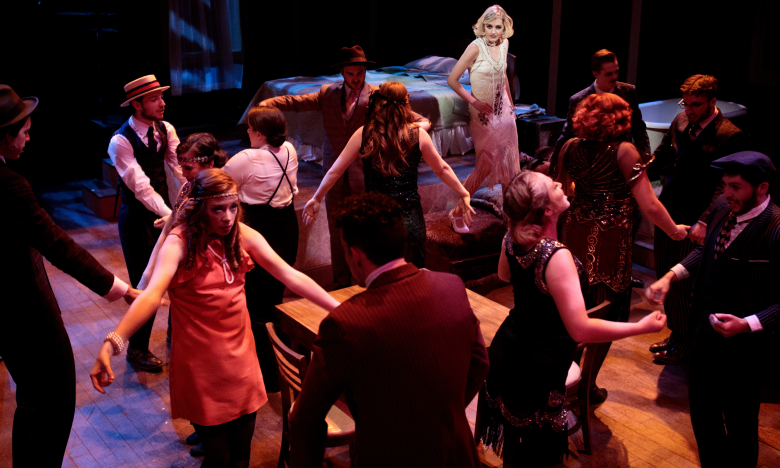 Most play goers were likely taken aback last weekend to find that “The Wild Party” had already begun, even before they’d found their seats. Audience members were led into the theater by scantily clad partiers with no sense of personal space, letting everyone know right off the bat what experience they were in for. And The Wild Party was just that-an experience.

“The Wild Party centers around the violent, dysfunctional romance between Queenie and Burrs and a decadent and deadly all-night party in their 1920’s Manhattan apartment” is how director Courtney Kattengell summarizes the story. “I must warn you that this is not a pretty tale wrapped nicely in a bow. It is aggressive and quite vulgar at times.”

At the start, Kattengell didn’t even think she would be the one to direct the show. “I wasn’t really crazy about doing it. I was like, whatever, I’m not [directing] it. I was doing Sweet Charity last year, and I was like, knee deep in Sweet Charity.” It wasn’t until a few weeks before Sweet Charity opened that Kattengell was told she would, in fact, be The Wild Party’s director. “Two days after Charity closed, we had auditions. So, I was really not mentally prepared for what I needed to do for the show.”

She wasn’t the only one who was trying to recover. Hallie Heffernan, the senior  who starred as Queenie, had just completed another starring role as Charity.”I had just finished a leading role, so I went in not expecting to get another one-and then I was casted as Queenie.”

Practices were a challenge at first as well. “The rehearsal process was difficult. We were up against Romeo and Juliet for space, so we were in the dance room-which is half the size of the theater. So, we had to work in halves. And it was a rough for weeks, but we got to Mathile, and were about to spread out.” once the crew had moved to the larger practice room, things really began to fall into place.

Raymond Cronley’s character Burrs is a complex individual; one that had to commit several atrocities on stage. “I am nothing, obviously like Burrs. It’s really an opportunity to explore the character and just throw so much energy at this idea of the character, and trying to make it believable on the stage and in a story. There’s more depth in these characters and in this play than honestly anything i’ve ever done.”

To help the actors prepare for the more intense scenes, “Intimacy Training” was introduced at ONU. “Both of our acting professors actually went to an intimacy like, training session,” Cronely explained. Heffernan went on to explain the exercise.

“So, long story short, it basically requires you to get with your scene partner, and while vocalizing what I’m comfortable with, with my own hands, I begin to touch myself where I’m comfortable…and then, I say ‘Can I touch your hands?’ With my guidance, I put his hands on my body where I’m comfortable. It has helped us tremendously and I think it should be used throughout all theater productions throughout ONU.”

So, despite how real the violence may have looked, absolutely everything was totally choreographed. It was the actors’ abilities and talents that made the more intense scenes of Wild Party truly real. Those that were lucky enough to see the show walked away with an unforgettable experience, showcasing that darker stories do have a real place on campus.

“Our production challenges our audiences to think about more recent and present day parallels” Kattengell wrote in the show’s program. Even in 2018, rage, jealousy, love, and partying are themes we can all relate to.