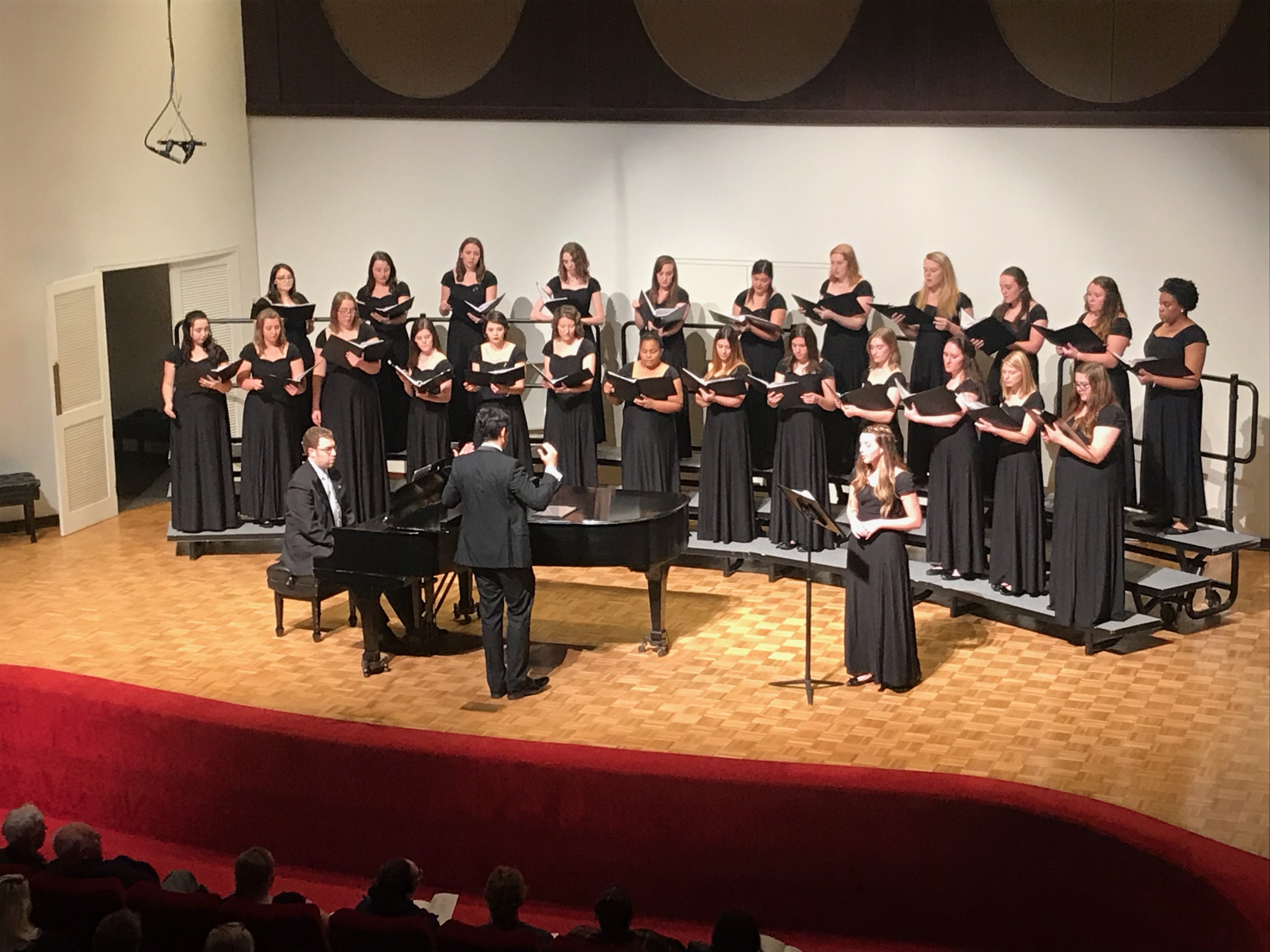 Each year the University Singers of Ohio Northern, the Chamber Singers, and the Women’s Chorus perform a Choral Collage Concert to entertain those who attend with their songs for that year. This school year the Choral Concert took place on October 26, 2018 in Snyder Recital Hall.

The University Singers were the last group to perform for the night. They sang four songs as well. The director, Larsen, stopped between songs and explained that the overall theme for the University Singer’s songs was that of the distance between a person and a god. This theme created a show with many deep and emotional songs.

This was Larsen’s third year directing the Choral Concert. Larsen included, “My favorite thing of the whole thing is the alumni come back and they sing. It’s kind of cool to see.”

The atmosphere was special. Snyder Recital Hall was full of family, friends, and relatives who were there to enjoy and support their loved ones on stage. Applause erupted throughout the hall after each performance to show the appreciation that the audience held for the singers.

The choral concert fell on the same weekend as Homecoming this year. This lead to many alumni returning to the event. Alumni Britt Lauck gave some feedback after the performance. She said, “I really liked the soloist and I liked that the songs were related to a relationship with a god or trying to get closer to God. I really enjoyed the song Please Stay, because it was really touching to see that the choir had a real connection to it.”

Lauck continued to explain why she enjoyed the song Please Stay.

Larsen gave some insight to the background of the song Please Stay. He explained, “I heard it two years ago at the Ohio Educators Music Association. The purpose was directed towards something about suicide prevention and mental health.” He explain that the composer took on this idea of suicide prevention and there was a hashtag created. Larsen could not recall the hashtag. The composer then took numerous hashtags from that Twitter campaign and those are what are used in the monologues of the song.

Larson continued, “The goal in the spring is to have a table in McIntosh and do our own version of those at Northern, and then use those. So that way it becomes even more personable.”

Please Stay was immensely impactful on the audience.

During the performance there was nothing but silence and attention from the audience. The song was emotional and referring to a god and asking it to please stay. It seemed to be a cry for help or guidance. Numerous singers stepped forward and gave a short monologue towards the end of the song.

Each covered an emotional and serious topic such as eating disorders, mental disorders, and suicide. These issues are so relevant and important in society that this song had a lasting touch from both the meaning of the song and the voices of the singers.

The Choral Collage Concert transitioned from the University Singers to the Benediction. The Benediction is a time that current and previous singers of the concert join hands on stage to sing a song together.

The concert ended with the Ohio Northern University Hymn where the audience was encouraged to stand and join along. ONU student Maya Bell, a Soprano, led the verses of the hymn. The show concluded with enormous applause from the crowd.

Many of whom will likely return for next years Choral Collage Concert.

Lauck concluded her conversation mentioning, “This is my first concert that I have attended, but it definitely won’t be my last. The music was amazing and the passion of the singers was impactful.”