Students Claim to be Chased by Clowns Across ONU’s Campus 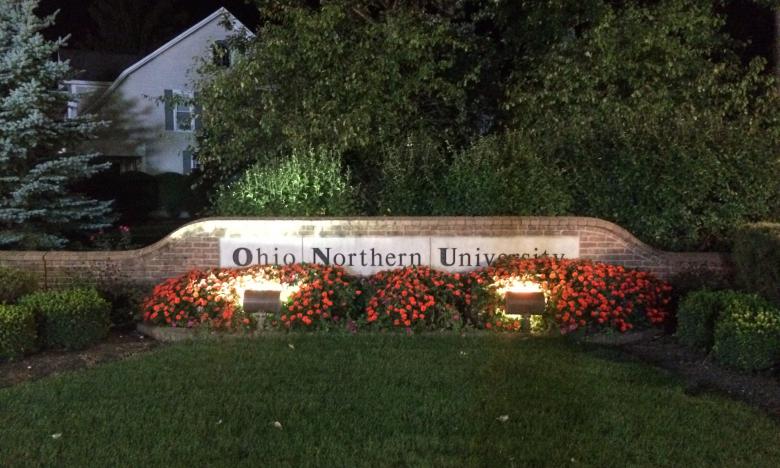 Two students at Ohio Northern claim that they were chased by someone dressed as a clown near the mud volleyball courts at 11 p.m. on Tuesday night.

Shelby Maraugha, a junior molecular biology major, and Chip Ranck, a junior manufacturing technology major, were walking on the green monster by the mud volleyball courts late Tuesday night when they reportedly saw someone pacing back and forth by the baseball field.

The person was near a parked truck with its lights on, and was walking in the grass “about 100-200 feet away” from the two students, according to Ranck.

“We thought it was security and didn’t think anything of it,” Ranck said. “We got closer and eventually stopped just to see exactly who it was. When we did that we could tell it was a clown.”

“All I saw was a white face and a big red smile and red hair and striped pants and he was holding something big and long,” Maraugha said. “It kind of looked like a butcher knife.”

“He was wearing contrasting colors for striped pants, with white face paint and a red smile like The Joker. He had a bald spot on the top of his head with red hair,” Ranck said.

“When we stopped, he stopped as well, and he noticed us and then started to walk quickly in our direction.”

“He stared right at us and started walking faster and faster,” Maraugha said. “And we started walking up the road towards the circle and we walked across the tundra, between the dorms and back to the apartments.”

“We were just far enough to get away, but still close enough to be able to make him out,” Ranck said.

Both Ranck and Maraugha say that while they did not call the police at the time, they wished they had looking back on it.

“Looking back on it, we should’ve, but that wasn’t our first thought,” Ranck said. “It’s one of those things where you can talk about what all you would do and wouldn’t do, but when you get into that situation, none of those things happen and you just act on instinct.”

After the two had returned safely to their dorms, Ranck texted in a group message to a couple of his friends about what had happened. Ranck and Maraugha also tweeted about the incident that night, which drew campus-wide attention to the scare.

“Last night we tweeted something hoping that people would notice and be careful walking around campus,” Ranck said.

“A lot of people have seen our tweets,” Maraugha said. “And it’s been brought up in pretty much every class and someone is always like, ‘Yeah that was Shelby.’”

Maraugha said that “a few” people have questioned her recollections of Tuesday night’s scare, and Ranck said that two people told him that they “didn’t believe” him.

“I mean, I saw what I saw and I know I’m not crazy because Chip saw it too,” Maraugha said. “And honestly, I didn’t believe other people [across the country] saying they saw clowns. And then I saw it myself and now I feel bad because I should have believed them.”

“It kind of feels like those creepy horror posts you read on Twitter and have never believed would be true.”

Ranck pleaded, “You don’t have to believe me, but I know what I saw and just be careful.”

This incident coincides with the clown craze that has swept the nation over the past month, with many cases of ‘creepy clown sightings’ usually resulting in harassment charges or charges for terroristic threats by teenagers on school districts.

As of Wednesday afternoon, Ada police chief Mike Harnishfeger reported that his department had received three phone calls concerning clown sightings within the village so far, although no clowns had been spotted.

“Two nights ago, we received a call for one, and an officer was within seconds of the alleged location, but there was nothing there” Harnishfeger said. “I don’t know if someone just got spooked or what.”

“We’ve received a couple of calls, but nothing has been verified. We have seen no clowns in Ada.”