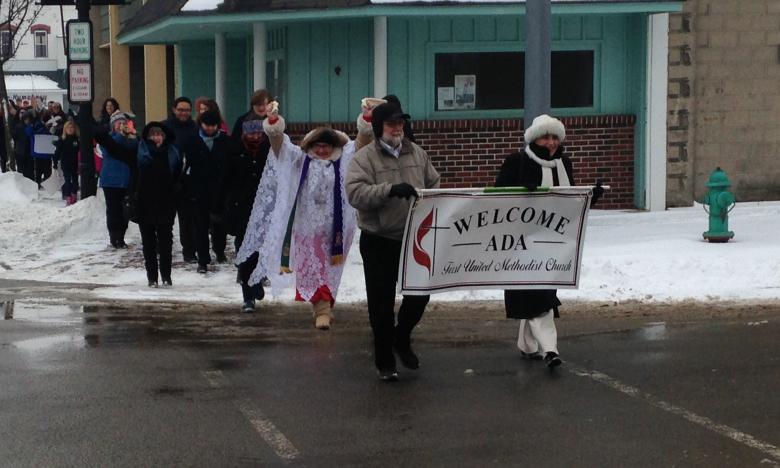 Smoke rose from the top of the Ada First United Methodist Church building on March 13, 2012. It didn’t take long for the flames to completely devour the church and leave behind nothing but memories and remnants of the church building, originally built in 1899.

However, the people of the Ada First United Methodist Church did not give in to disappointment. Instead, they held strong to “the people are the church.” On February 22, 2015, the congregation was able to march down Main Street to enter their new home after 3 years of hard work towards their vision. On April 12 at 10 a.m., the church will be holding a dedication that all are welcome to come and witness.

Chris Gray, accompanist for the Ada First United Methodist Church and student at Ohio Northern, felt that the event was a great example of the community coming together to overcome adversity.

“The joy and enthusiasm of the congregation marching towards the new church was infectious and nothing short of inspirational. It was a blessing to be a part of such an event,” said Gray.

Mary Jo Yeakel, reverend for the Ada First United Methodist Church, expressed her admiration of the congregation’s integrity that was brought forth during the rebuilding of the church, even though it was not an easy thing to do.

To rebuild the church, the summer following the accident, Yeakel formed a steering committee to help build the vision of the new building. After much research and communication with other United Methodist Churches in the area, they developed a concept for their plan. Together they wrote values and expectations for their “Vision of 2012.”

During the three years of rigorous construction, the congregation continued their ministry within the ONU English Chapel. While spending time with Ohio Northern students, Yeakel recruited multiple student choir directors and an accompanist to assist with the growth of the music ministry for the congregation. In recognition of their hard work and growth, the ONU University Singers will be performing at the church on April 26 at 8 p.m. Yeakel refers to the concert as the “Inaugural Concert.”

“There is no way that we will ever completely understand the gift of the Chapel, of the office space, and of resources beyond our imagination. All of this has been provided by for us. We are so grateful,” Yeakel said.

Within three years, the church was completely rebuilt from the ground up. This construction, faithfully, met its deadline and was raised before Easter. Therefore, the congregation celebrated their first Easter celebrations in their newly built church. Now the Ada First United Methodist Church prepares to host their traditions in their new home, proving that “the people are the church.” They may have lost their building, but they never lost their hope.