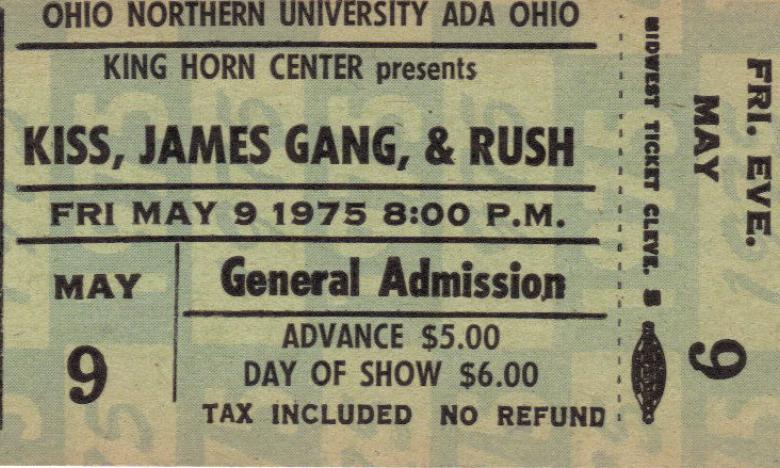 Did you know that in 1975 the band KISS, that’s right, KISS, performed here at Ohio Northern? The show was said to be nothing short of amazing and even included the band’s iconic pyrotechnics. Even with the flames getting out of control and setting fire to the newly opened King Horn’s ceiling, the show went on as if nothing happened.

If you’re as surprised about this event as I am, you’re probably thinking, “Why doesn’t ONU still have concerts here?” It surely isn’t because KISS almost burned down King Horn. Despite ONU’s vow to never host a band who uses pyrotechnics again, this still wasn’t the first or the last band to come to our campus.

In 1972, the band Steppenwolf performed for ONU students and in 1975 Rush came along with KISS. Even more recent, in 2006 the band O.A.R. came and performed. Between 1975 and 2006, why hasn’t ONU had any other big-name bands perform? And why didn’t the O.A.R. concert revamp the tradition of bands coming to our campus?

It wouldn’t be uncommon for big-time bands and artists to come to our school. Wittenberg University has WittFest, University of Cincinnati has the Red and Black Bash, and every school in the New England area has CollegeFest. All of these events, which are free to students, have live music and big-name artists perform. They’re either held at the beginning of the academic year to welcome the students back or as an end of the year celebration. Students respond positively to these events and school spirit is boosted.

The closest we’ve had to having a band perform on our campus recently were small country bands and the small folk-rock band Branches, provided by Student Planning Committee. I spoke with the SPC’s president, Mariah DiBiasio, and she said that bringing big-name artists to perform at ONU has been brought up. But, apparently, there are too many variables and logistics that go beyond the SPC’s control.

“SPC does not have all the resources to host a large-scale concert on our own. We would need support from the entire campus to help with logistics and budgeting. Time commitment is also a large variable. Large-scale concerts need to be booked about a year to a year and a half in advance.”

Mariah also went on to explain that the SPC is open to having large-scale concerts on campus, just as long as they know who students are interested in seeing and how much they’re willing to pay. SPC might have a good thing going so far by bringing smaller-named bands and artists to our campus, but they also need to ask students how they feel about that band and the type of music. At that point, they should be able to get a general idea of what type of music the students on our campus enjoy. They could conduct a survey; it’d be faster and put a head start on the planning process.

I wish I would have been able to see KISS in 1975, O.A.R. in 2006, or any mainstream artist during my four years here as a Polar Bear. I do have hope, however, that the entire campus will support SPC and a concert will happen here in the near future.