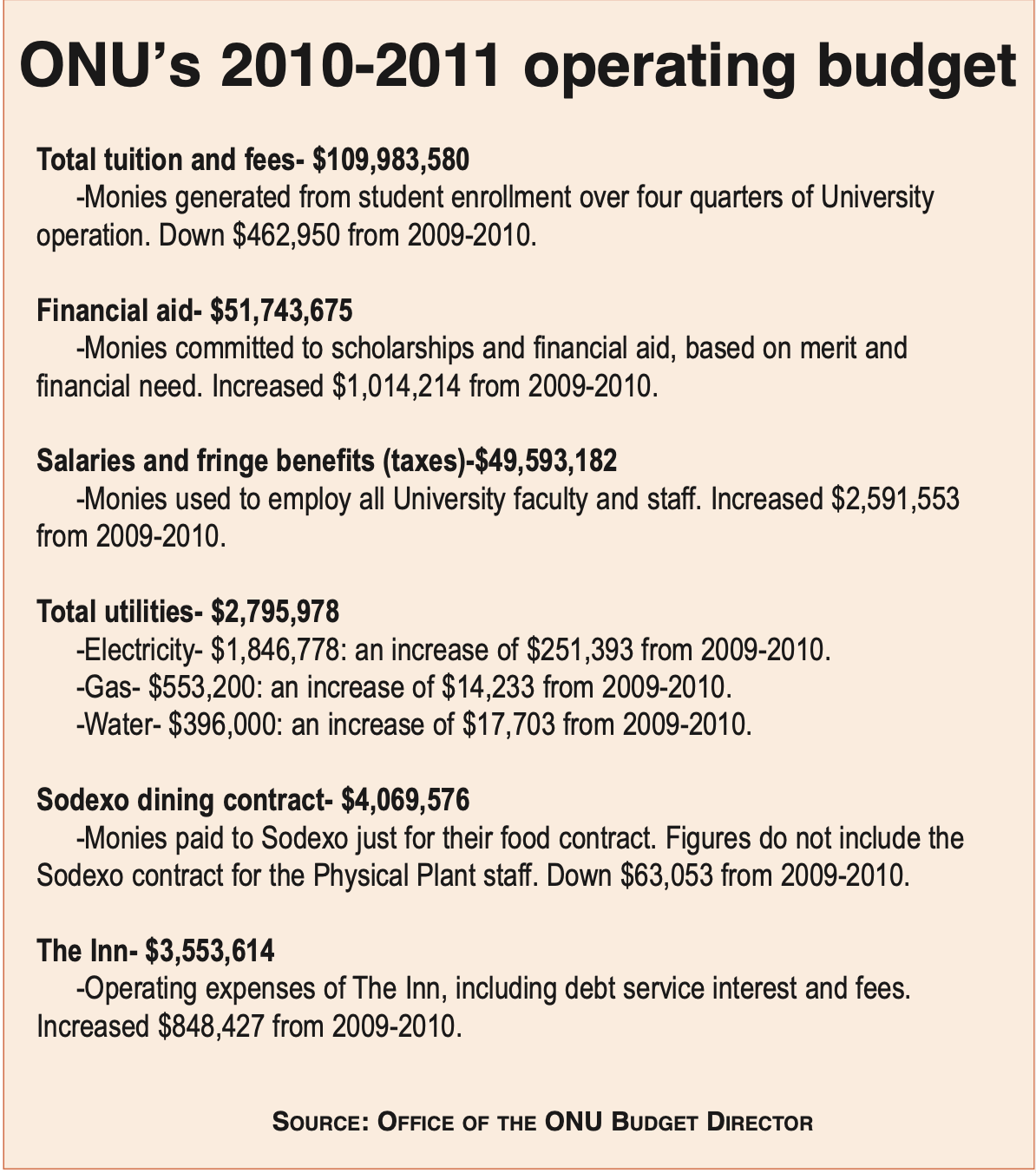 Ohio Northern University will be operating with approximately $3 million less next year, President Kendall Baker told faculty and staff in a budget plan presentation in mid-December.

Despite budget cuts designed to generate savings equal to that shortfall, the other half of the University’s budget proposal includes an increase in sources of revenue. One of those sources deals with tuition.

“I’m sure there will be [a tuition increase],” Baker confirmed in an interview last week with The Northern Review editors.

Monitoring the percentage of tuition increase and guiding the University through its budget cuts is ONU’s Director of Budget, Suzette Fronk. She comes to ONU with three years experience as assistant director of contract and fiscal planning at the University of Toledo.

In response to a question about revenue sources that drive ONU, Fronk said student tuition pays for all operations of the University—”everything from salaries to utilities to lawn mowing.”

Although Fronk says maintaining tuition at its current level is her goal, she also recognizes increasing expenses and expectations that require an institution, such as ONU, to look to its highest revenue generator (tuition) for support.

“It is a constant review of expenses to try to keep the tuition as low as possible, yet still
operate at a level that our students, and faculty and alumni have come to expect,” Fronk said. “If tuition has to increase, it’s always the most conservative increase that we believe we can pass on.”

Baker seconded that notion in his interview, saying, “We’ll try to keep the percentage increase as low as we can.”

In order to minimize the need for a large tuition increase, Baker said in his budget presentation that the University would reduce expenses by “changing the way we do business at ONU.”

However, any proposed percentage of tuition increase must be approved as a “projected budget” by ONU’s Board of Trustees, which meets in February. A final budget is not complete until the University has conducted its official headcount at the beginning of the academic year 2011-2012.

Another aspect of the University attempting to bring its financial house in order is the organizing of a chart of accounts by the direc- tor of budget. A chart of accounts is an exhaus- tive list of finances, Fronk said. It is comprised of an organization number, which explains who is spending money, and an account cod

ONU’s chart of account has not been updated in at least 30 years, Fronk said—”It’s a very aggressive thing to do; it’s not done very often.”

The lack of an updated chart of accounts can “really handicap an institution in planning, because you don’t really know what you spent in the past,” Fronk said. This can lead to over- spending, Baker said in his Review interview.

“There are all kinds of dollars that don’t necessarily get spent for precisely what it is that they may have been intended to be spent for in the original budget,” Baker said. “That gives a good deal of flexibility to the budget.” The University had been used to having flexible resources to compensate for overspending in the past, Baker said.

However, “as we have experienced the enrollment losses, we have lost revenue; as we have lost revenue, the amount the flexible revenue that the University has is going to be less, so there is more reason to very seriously review expenses and make sure that people are accountable for those expenses,” Baker said.

In doing a new chart of accounts, the various University departments and functions will not only be accountable for their spending, but ONU will be better able to predict the finan- cial needs of the upcoming year, Fronk said.

Another recent “change of business” is the hiring of a new controller, Michelle Mahoney. Before Mahoney joined the staff on Aug. 8 of last year, the University had been operating without a controller for more than six months. Part of the gap between the resignation of one controller and the appointment of a new one was due to the length of a candidate search, Baker said.

As opposed to Fronk, Mahoney’s position is concerned with the actual expenditures of the University, rather than those budgeted.

“While I don’t have any doubt that not having a controller for six or eight months probably had some kind of impact [on the University], I have complete confidence that the work of the controller’s office was done very effectively for that period of time,” Baker said. In the interval between controllers, the ONU Bursar’s office had been acting in the controller’s stead.

However, the University concluded that it was necessary to fill both positions again.

“While you certainly can have a bursar who performs the role of a controller for a period of time, to do that permanently means that one of those jobs is simply not going to get the attention that it needs,” Baker said.

While the consolidation of both offices would have saved the University money, to potentially overwork the Bursar’s office would have reflected negatively on the institution during its outside audit, Baker said. In effect, a citation concerning how the University conducts its financial affairs could affect ONU’s ability to secure future loans.

“You just can’t run those kinds of risks,” Baker said.

The question of whether both financial positions needed to be filled spurred a University- wide employment assessment. “We have to look at all the positions that are open, and we have to make sure that we have a clearly iden- tified and reasonable rationale for whatever it is we do,” Baker said. “And that’s what we’re doing.”

No decisions have been made as to where the University might consolidate, but “there is not any question that the merger of units is something that we have to assess,” Baker said.

That said, “There is more to this than just what the cost savings are,” Baker stressed. “There would have to be other compelling reasons to merge units.”

Other areas that may see a condensing of responsibilities are the classrooms. If enrollment continues its two-year decline, Baker says the University will need to determine the need of its part-time staff (adjuncts, visiting professors). Baker’s budget presentation proposed reducing this cost by $350,000.

“When you have a decline in enrollment, then you do not have to have as many instructors to meet the needs of the smaller enrollment,” Baker said.

Conversely, Baker said he was “convinced” that if the University found itself in further financial trouble, it would continue to try to avoid laying-off full-time faculty.

“When the economy revives and enrollment increases, the University will have to have the personnel to meet the needs of the students,” Baker explained.

Baker does not anticipate enrollment’s continued decline, though. In fact, he expects the University to welcome 1,154 new students to campus next year—an addition of 27 to the 1,127 new students admitted this year.

Nevertheless, “that might not mean the total number of students will be up significantly,” Baker warned.

In the midst of the current economic doldrums, returning students have decreased, but an increase in freshmen will move the University back in a positive direction, Baker said.

Regardless of enrollment numbers, Baker said the University is still in a position that requires it to examine its current budget to determine where money can be saved.

One of the first areas to be cut is hospitality (celebrations, dinners, welcoming events); the University proposes to reduce these expenses by $100,000. ONU began its reduction in hospitality this year, by eliminating the annual Christmas party for staff and faculty.

“We’re not going to compromise the things that bring students to our University and keep them here, but we will compromise some of the other things that are nice to be able to do, but we just can’t,” Baker said.

Reduced expenditures are also expected to occur in areas of technology and printing.

The University will not be greatly reducing technological support on campus, Baker said; rather, it is trying to “make the greatest use of technology.” Leading this change is the University’s recent move toward a “paperless campus.” ONU expects to continue in that direction, Baker said.

Along with expense reductions, the University also plans to increase revenue by $1.7 million, Baker said in his presentation last month.

Increased revenue will be earned by starting a master’s program in Public Accounting in the Dicke College of Business Administration and adding a lacrosse program to ONU’s athletics, Baker said.

The lacrosse program’s projected revenue was unknown at the time of Baker’s presentation. But Baker expects lacrosse to be a strong asset to ONU’s recruiting, which would increase enrollment and thereby revenue across the board. In the past, Baker said the University has lost students because of its lack of a lacrosse program.

“I definitely think [the lacrosse program] is a good idea because it brings in students that may not have considered ONU originally. By having sports, it absolutely adds to the attractiveness of the University, and would add more excitement on campus,” Pat Dochenetz,

Despite lacrosse’s current absence from the Ohio Athletic Conference, Baker said the other universities are discussing adding a pro- gram, as well.

Although Baker is preparing to retire at the end of this year, he says it is important that he remain active in seeking these types of finan- cial solutions to the University’s current “budgetary crisis.”

Baker said he has experienced similar financial difficulties to those of Northern three times throughout his career as a university president. Consequently, he said he is using notes from his previous experiences to help solve ONU’s budgetary issues.

Mirroring past effective strategies, Baker is developing a series of budget scenarios based on projected needs, which the next University president will have ready for immediate implementation.

“I don’t know what the enrollment will be in 2011, and I’m not going to be here to monitor it, but whoever is here will have some scenar- ios that everyone knows about that will gener- ate the resources that are needed to balance

Regardless of Baker’s budget proposals, an accurate outline of the University’s financial changes will not be approved until February. Pending approval, all proposals are speculative, Baker said.

“My position from the beginning has been that I want to put everything on the table that’s possible, and then I want to hear what people have to say about that…and then we will ultimately decide what it is we have to do,” Baker said.

See part two in this series next week’s issue.